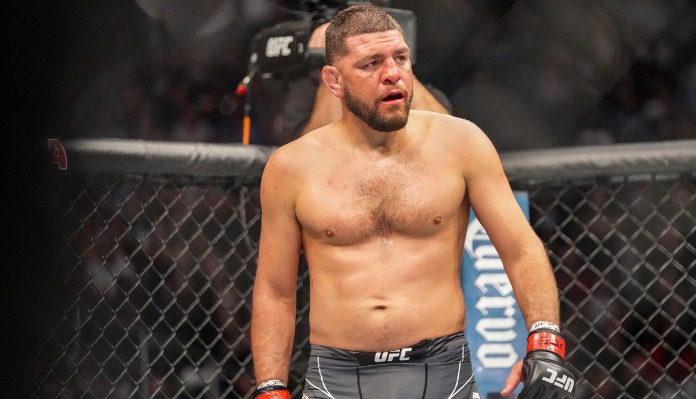 Nick Diaz plans to return to the Octagon later this year, in 2022, and is requesting a fight with Kamaru Usman.

Diaz last fought in September 2021 at UFC 266 where he went down to defeat against Robbie Lawler (29-15 MMA). Prior to that loss, Nick, 38, had been away from the fight game for six and a half years.

The UFC welterweight champion, Usman, underwent surgery to address a damaged ligament in his hand, but is expected to be back in action later this year.

In speaking with ‘TMZ‘, Nick Diaz had this to say about his return to the Octagon and who he wants to fight:

“(We’re) working on end of the year. … I’m just focused on my training right now. If I’m going to fight, I want to fight for the title. … They want to say that I want to fight a bunch of guys and stuff like that. Well, you know what? It’s a bigger fight.”

“Just skip all the mess. I don’t need to go in there and get my ass whooped by one of the young guys, anyway – and it’s not that I won’t win. It’s just not motivating to fight somebody that’s – I want to fight for the title. I’m 38 years old.”

Do you believe Nick Diaz should be given a title shot against Kamaru Usman? Who do you think would come out the victor?