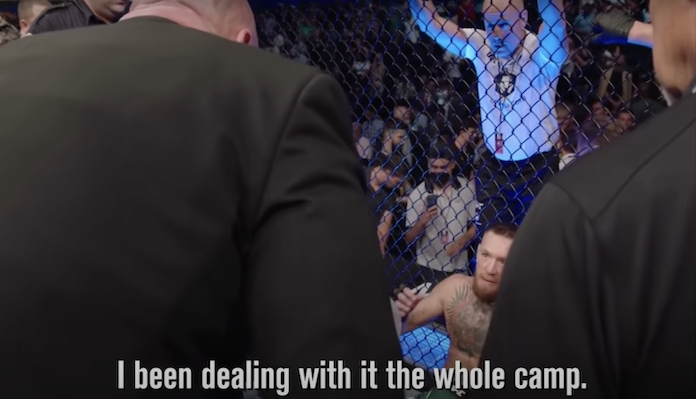 New UFC 264 footage shows Conor McGregor telling Dana White of his pre-fight injury, admitting “I had been dealing with it the whole camp.”

McGregor suffered a broken leg against Dustin Poirier in the main event of UFC 264, which led to the Irishman losing the fight via first-round TKO (doctor stoppage). It was his second straight loss against “The Diamond,” but unlike the second fight where Poirier left no doubt about the stoppage with a brutal second-round finish, this time around there are some question marks about the way the fight ended due to McGregor having been injured before entering the cage. “Notorious” has admitted that he had fractures heading into the fight but he chose to stay on the card and ended up paying for it with the injury TKO loss.

In newly-released footage from “The Thrill and the Agony” at UFC 264, McGregor is seen speaking to the UFC president White and telling him that he had an injury with his leg heading into the fight with Poirier. According to McGregor, he had been dealing with the injury his entire camp but he never expected it to end with him having his leg broken.

“I had been dealing with it the whole camp. I didn’t think nothing was going to happen, though,” McGregor told White in the cage.

Unfortunately for McGregor, he suffered the shattered limb and he will now be on the sidelines for the better part of the next year as he looks to recover from the grisly injury. When he does get healthy and returns to the cage, McGregor has made it clear that he wants to have a fourth fight with Poirier in order to prove that the injury was a fluke.

Do you think we will see Conor McGregor make a successful comeback to the UFC?