UFC welterweight superstar Nate Diaz says that he can see, hear and feel the hate following the announcement of the Leon Edwards booking.

Diaz hasn’t fought since November 2019 when he lost via TKO (doctor stoppage) to Jorge Masvidal at UFC 244. We haven’t heard much of the Stockton native lately, but then last week the UFC made the surprising announcement that he will be fighting Edwards in the co-main event of UFC 262 on May 15 in Houston, Texas. This will be the first time in UFC history that a non-title, co-main event is set for five rounds, and it’s an indication that the winner of Diaz vs. Edwards will be next in line to fight for the UFC welterweight title.

Ahead of his comeback to the Octagon, Diaz took to his social media to react to what he’s been hearing from the fans ahead of this matchup with Edwards. The tweet has since been deleted but you can see what Diaz wrote on his Twitter in the screen capture below. 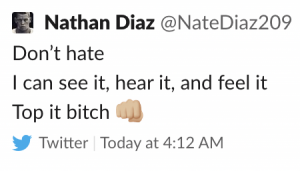 “Don’t hate. I can see it, hear it, and feel it. Top it b*tch,” Diaz wrote in the now-deleted Tweet.

For Diaz, this fight against Edwards is a massive opportunity for him to jump right back into title contention after missing over a year following the fight with Masvidal. Even though Diaz hasn’t won since a decision win over Anthony Pettis at UFC 241, he is still obviously one of the biggest names in the sport, and getting a win over Edwards would be absolutely massive for him. Considering Masvidal got not one, but two title shots against UFC welterweight champion Kamaru Usman following the win over Diaz, this is a huge fight for both the Stockton native and Edwards when it comes to the welterweight title picture.

Do you think Nate Diaz can beat Leon Edwards as a big underdog at UFC 262?