Nate Diaz has issued his response following a suggestion from Stephen Thompson that he should go back down to lightweight.

It’s well known that “Wonderboy” is one of the nicest guys in mixed martial arts but beneath that exterior, he’s also one of the most dangerous welterweights on the planet – and he’s been proving that for years now.

As he prepares to meet Gilbert Burns in what could prove to be a number one contender showdown, Thompson seems to have made a comment that prompted a response from Diaz – prior to Mr. 209 deleting his tweet, of course. 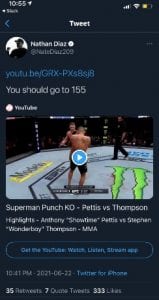 For those who don't know. Here's Wonderboy telling Nate to go to 155 https://t.co/oBYPHRJ5eC

Perhaps Diaz decided against feuding with one of the most loved characters in MMA or, instead, maybe he feels as if he’s got bigger fish to fry, whether that be at lightweight or welterweight.

Diaz has always been something of an enigma in this sport and nothing is going to change that, so we wouldn’t rule him out of staying up at 170 pounds if necessary. Thompson, on the other hand, knows that this could serve as one of his final opportunities to claim the gold as he prepares for July 10.

Who would win if Nate Diaz and Stephen Thompson ever squared off? Let us know in the comments, BJPENN Nation!