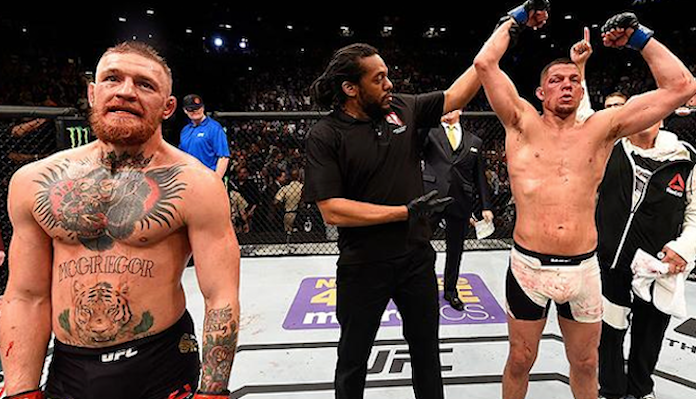 Nate Diaz has no interest in fighting Conor McGregor for the third time unless he sees some things from the Irishman.

Diaz has been campaigning for a fight for quite some time but many thought he would be holding out for the trilogy match against McGregor. Yet, according to the Stockton native, he won’t fight McGregor until the Irishman picks up some wins and shows he can actually win fights still.

“I’m not fighting Conor until his leg grows back and he beats some people so we know he can even fight still till then Can I get on January card @ufc Thanks,” Diaz wrote on Twitter.

Diaz’s tweet is sort of surprising as the trilogy with McGregor would be a massive payday and be another massive fight for him. However, it’s likely the fight will always be there to be made and right now, Diaz wants to be active and wants to fight in January.

Nate Diaz has talked about fighting Dustin Poirier in January as both men expressed interest in the scrap. Yet, on Friday, the Stockton native said the fight wouldn’t happen as the UFC wouldn’t pay enough because Poirier isn’t a big enough name.

Diaz is currently 20-13 as a pro and on a two-fight losing streak after suffering a decision setback to Edwards in June. Prior to that, he lost by TKO to Jorge Masvidal at UFC 244 in MSG for the BMF belt. Despite not being ranked, the Stockton native still remains a big draw and can demand big fights. As mentioned, he wants to be active and is looking to fight in January but whether or not that happens is to be seen.

As for McGregor, he is still rehabbing his leg and his exact timeframe is uncertain. Who he will fight in his return is also unknown but it appears it won’t be the Diaz trilogy.

What do you make of Nate Diaz’s stipulations he needs from Conor McGregor?