Fan favorite UFC welterweight star “Platinum” Mike Perry has shared a list of eight fighters that are currently in his crosshairs.

See it below (via MMA Mania): 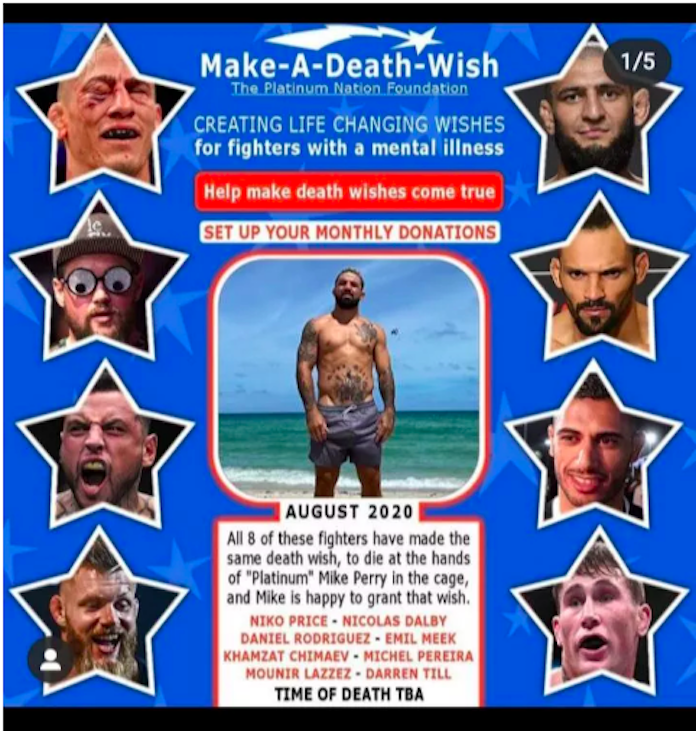 As you can see, Perry has his eyes on fights with Niko Price, Nicolas Dalby, Daniel Rodriguez, Emil Meek, Khamzat Chimaev, Michel Pereira, Mounir Lazzez and Darren Till. Several of these fighters have found themselves in his crosshairs before—most notably Darren Till, who now competes in the UFC middleweight division.

Mike Perry last fought in June, when he picked up an impressive decision victory over Mickey Gall. Unfortunately, this victory was followed by some trouble outside the cage, as Perry was involved in an altercation at a Texas restaurant and ultimately knocked a fellow patron unconcious.

After this incident, Perry issued a public statement, apologizing to the UFC and his sponsors.

“I want to be a better role model for my family,” he wrote on Twitter. “For my unborn son. My Queen Latory Gonzalez and for myself so I can earn the respect I deserve. To my sponsors and my bosses at UFC. I want to apologize for how my actions have impacted our relationships. I will be better all around.”

The UFC also issued a statement on the Perry situation.

“UFC is aware and troubled by the video that was released last night concerning Mike Perry,” the statement, which was obtained by ESPN, read. “The conduct displayed by Perry is no reflective of that of our organization. Perry apologized for his behavior and acknowledged he was disappointed with himself that his actions may have reflected poorly on UFC. He further acknowledged that he believes he has some issues related to alcohol abuse and has informed UFC that he has committed to immediately seek professional treatment, including substance and behavioral counseling. At this time, UFC has informed Perry that he will not be offered a bout, and the parties have agreed to evaluate next steps for Perry following the completion of his treatment program.”

Hopefully, Perry is soon able to put these issues behind him and start focusing on fights with some of the eight men on his list.