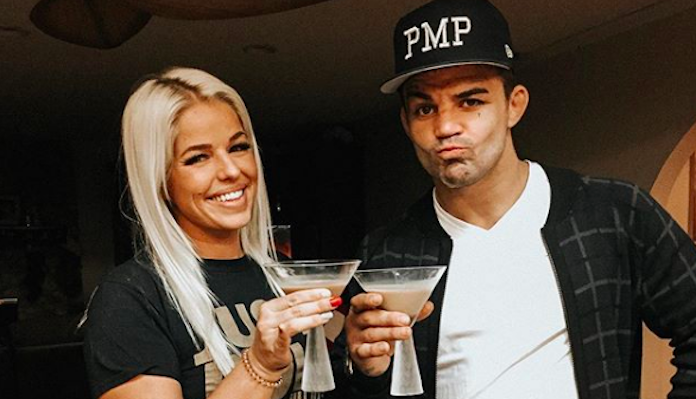 UFC welterweight Mike Perry has issued a statement denying abuse of his ex-wife, saying that “I did not put my hands on my ex.”

Perry was previously in a relationship with Danielle Nickerson (aka “The Platinum Princess), who has hinted at signs of an abusive relationship in several social media posts. According to Perry in his statement, a media outlet will be running a story detailing Perry’s abuse towards Nickerson. Looking to get ahead of the upcoming story, Perry released a statement on his social media vehemently denying any allegations of abuse.

“It’s come to my attention that a media organization will be running a story in reference to a past issue with my ex wife. I would like to address this here now. First and foremost I did not put my hands on my ex at any point in our short term marriage. Secondly, I have already admitted to having an issue with alcohol, and I have been a part of an intensive rehab program that was able to help address not only that but also helped me with anger management. After the completion of the course, I realized that I had said some things in the past that do not put me and what I stand for in the best of light and for that I apologize. I am now in a loving relationship where I am looking forward and excited to welcoming my first born. I’m hopeful, my ex can move on and find peace as I have.”

Mike Perry (14-6) is next set to take on Robbie Lawler at UFC 255 in November. The welterweight fan favorite is coming off of a decision win over Mickey Gall in his last fight. However, his 2020 has been marred in issues out of the cage including an incident at a bar where a drunken Perry punched an older man. Following that incident, Perry now says he is takings all the necessary actions to deal with his issues with alcohol.