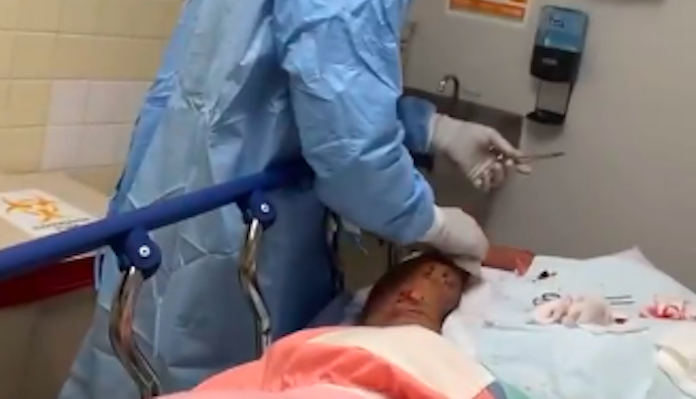 Controversial UFC welterweight star Mike Perry has gotten stitched up after a bizarre and bloody incident on Sunday night.

The incident in question seemingly occured after Perry attempted to smash a sheet of glass with his foot. That decision left him laying in a pool of his own blood in a hallway—a concerning situation he shared with his fans via his Instagram story.

“F*ck am I supposed to do about this?” Perry said in the video.

No matter what I do it’s never enough. So I act out. Happy to spill my own blood.

“No matter what I do it’s never enough,” Perry wrote on Twitter shortly thereafter. “So I act out. Happy to spill my own blood.”

The good news is that Perry is seemingly all patched up. After his initial video, the welterweight posted a followup video to his Instagram story, which showed his foot being stitched up by a doctor. He then posted a video of himself walking his dog, so he’s evidently back on his feet.

While fans will no doubt be glad to see Perry is on the mend, this is unfortunately the latest in a long string of concerning incidents for him.

In the last year, the welterweight, who is currently awaiting the birth of his first child with his partner Latory Gonzalez, has been involved in a bar fight, and accused of domestic violence by his ex-wife Danielle Nickerson.

The bar fight incident, which saw Perry knock a fellow patron unconcious, prompted the UFC to issue a statement, assuring he wouldn’t be allowed to fight until he sought professional help.

“UFC is aware and troubled by the video that was released last night concerning Mike Perry,” the statement read. “The conduct displayed by Perry is no reflective of that of our organization. Perry apologized for his behavior and acknowledged he was disappointed with himself that his actions may have reflected poorly on UFC. He further acknowledged that he believes he has some issues related to alcohol abuse and has informed UFC that he has committed to immediately seek professional treatment, including substance and behavioral counseling. At this time, UFC has informed Perry that he will not be offered a bout, and the parties have agreed to evaluate next steps for Perry following the completion of his treatment program.”

Regrettably, Mike Perry is seemingly still dealing with some troubling issues—and without much in the way of public acknowledgement from the UFC.