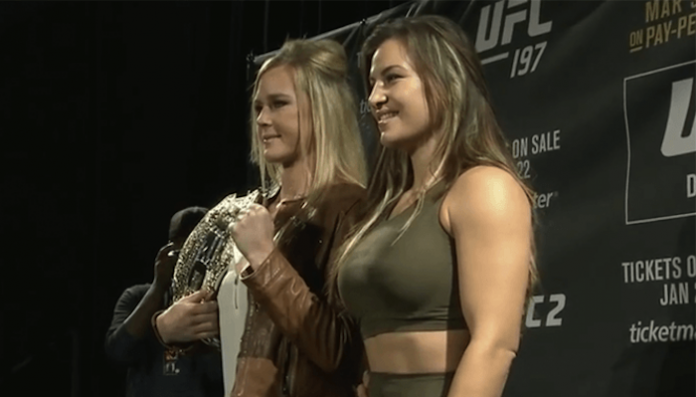 Tate got back into the win column for the first time in over five years on Saturday night when she defeated Reneau via third-round TKO. For Tate, this was a fantastic win after such a long layoff over a quality opponent in Reneau who was ranked in the top-15 of the UFC women’s bantamweight division. For Tate, the former champion, this is the type of big win she needs in order to start drawing the attention of the other big names in the division, including Holm, who apparently would like the chance to step in the cage with Tate again.

Speaking to reporters following UFC Vegas 31, Tate confirmed that she would be interested in a rematch with Holm. The two previously met at UFC 196 in March 2016 with Tate winning via fifth-round submission in one of the greatest comebacks of all time. Five years later and it looks like there is a chance we might see these two former champs scrap again.

“They’re all fair game, they can all get it, respectfully. I expect them to come out of the woodwork. I think a second fight with Holly, it’d be great,” Tate said (h/t MMAjunkie.com).

“There’s a lot of women in the division, so name them all. I don’t know where I’ll come in the rankings right now, but you know I’m never one to say I deserve this or that. I understand I have to continue to climb. But whoever’s name is on that list to get to the top, that’s fine with me. And I’m sure Holly and I, I have no doubt about it, her and I will fight again.”

Do you want to see a rematch between Miesha Tate and Holly Holm?