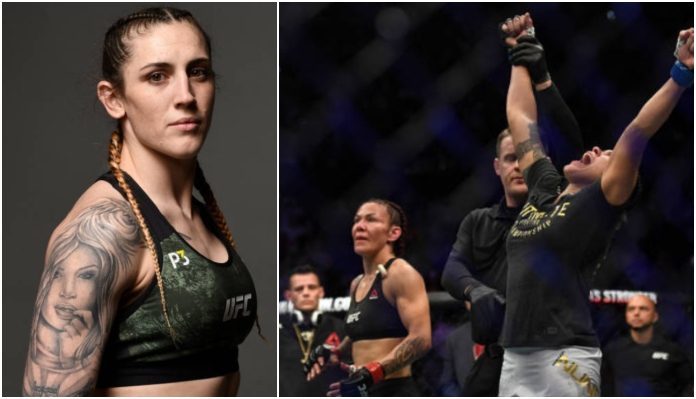 Well, UFC 232 has come and gone and less than a month later it seems that the ripple effect from the night’s results is about to be felt.

Today, the greatest female fighter of all time told Cyborg, who continues to campaign for a rematch, that she won’t be fighting at 145-pounds again.

Also fighting at UFC 232 was the only other legitimate featherweight on the UFC roster, the former Invicta FC champion, Australia’s Megan Anderson.

Obviously one of, if not the most interested person in the result of that co-main event, Anderson shared her reaction to Nunes’ recent claim.

Strip her then… I'll fight Cris for the vacant 145 UFC title if Amanda wont give her the rematch Cris deserves. https://t.co/R5KNmWFM1j

Strip her then… I’ll fight Cris for the vacant 145 UFC title if Amanda wont give her the rematch Cris deserves.” Anderson tweeted.

Following the responses from the community to her statement, Nunes has since been joking around saying she’ll challenge the likes of Daniel Cormier, Jon Jones or Brock Lesnar next.

Or maybe @BrockLesnar for my next defense.

However, Nunes seemingly got more serious when saying that Holly Holm would make for a good next defense at 135-pounds. Holm, of course, will be taking on Aspen Ladd at UFC 235 in March. Nunes also said she’s interested in going to 125-pounds. How seriously that should be taken is anyone’s guess.

As for Megan Anderson, she earned the first UFC win of her career at UFC 232 by defeating Cat Zingano via first-round TKO.

With really no other options for a UFC 145-pound title fight, Anderson vs Cyborg is the fight to make. That is assuming that Cyborg ends up staying with the UFC as she is now a free agent following the loss to Nunes.

Anderson and Cyborg have been scheduled to fight before as the two were paired for the second UFC featherweight title bout at UFC 214 in July 2017. Unfortunately for Anderson, some personal issues forced her from the bout.

Is now the time for these top featherweights to meet?