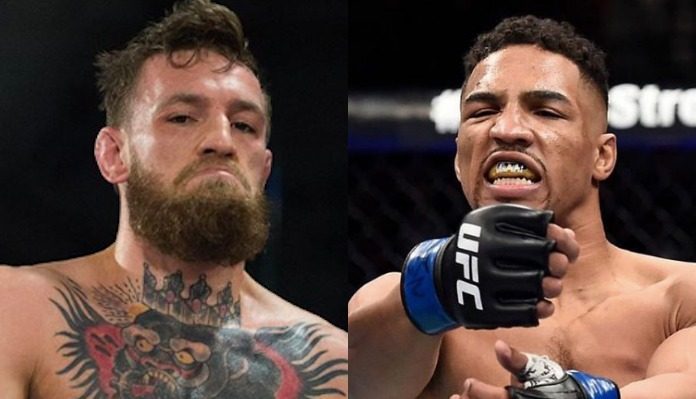 More often than not, former UFC lightweight and featherweight champ Conor McGregor is the one doing the trash talking. This time around, however, McGregor finds himself on the receiving end of some trash talk, as UFC lightweight contender Kevin Lee has lobbed a savage verbal shelling in the Irishman’s direction on Instagram.

Here’s what Kevin Lee had to say about Conor McGregor:

“I usually just stay in my lane but since n****s are putting out statements, let me take the time to say what I see from behind my eyes.
A real proper bitch is handed things over and over and never acknowledges it.
A real proper bitch avoids a challenge if it poses a real threat to its wellbeing.
A real proper bitch’s fragile ego can’t handle defeat.
It won’t hesitate to get on its knees for an opportunity to redeem itself.
A real proper bitch will ask for a handout from its governing body even when it possesses capable arms and legs to get it on its own.
Once a broke bitch, always a broke bitch. Money can’t make it real.
I apologize for my rant, I see you [Conor McGregor]. I’ll let you get back to rubbing your girls feet while you wait for [Floyd Mayweather] to call; I have my own work to do.
I need to bounce back from my last fight. I want to risk my spot and fight somebody beneath me in the rankings that think they can beat me right now. Whoever is up for the challenge in the [UFC] lightweight division, call my people and we’ll make it happen.” – Kevin Lee on Instagram