Surging UFC women’s flyweight prospect Maycee Barber will not take on rival Paige VanZant as she requested. Instead, Barber takes on veteran Roxanne Modafferi at UFC 246.

UFC 246 takes place on January 18 at T-Mobile Arena in Las Vegas, Nevada. The card is expected to be headlined by former two-division UFC champion Conor McGregor. MMAjunkie.com was first with news of the fight between Barber and Modafferi.

Barber has been vocal in calling out VanZant for a fight, but she didn’t get the fight she wanted as VanZant just wouldn’t budge. Instead, Barber will take on one of the most experienced veterans in the women’s flyweight division in Modafferi instead.

Barber is the top prospect at women’s 125lbs. She is a perfect 8-0 so far in her career, including a pristine 3-0 mark inside the Octagon with stoppage wins over Gillian Robertson, Hannah Cifers and JJ Aldrich. At just 21 years old, Barber is the youngest fighter in the division and one of the youngest fighters in the UFC in any weight class. She has finished seven of her eight victories and looks to be a superstar for years to come. 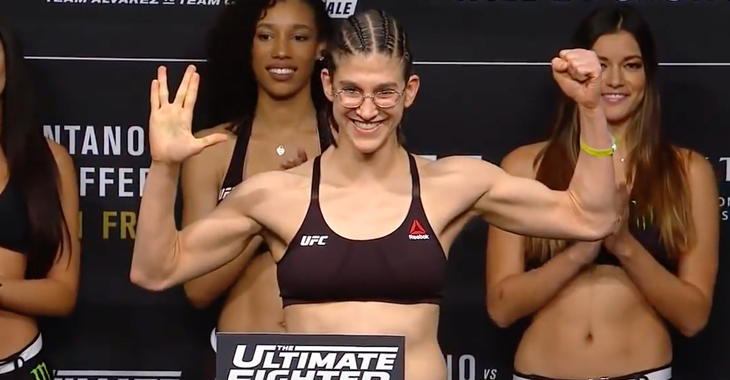 Modafferi is at the other end of her career at age 37. The former UFC women’s flyweight title challenger has been competing in mixed martial arts since 2003 and has fought for promotions all over the world including Strikeforce and Invicta FC. Modafferi has had two stints in the UFC and has an overall record of 2-4 in the Octagon. She is coming off of a decision loss to Jennifer Maia in her last fight, though she did beat Antonina Shevchenko before that.

Although Modafferi has tons of experience with a 23-16 MMA record, the fact she is 16 years the elder of Barber will likely not help her in this fight. Barber is going to be a heavy favorite to win this fight and with a victory will move one fight closer to a matchup against UFC women’s flyweight champion Valentina Shevchenko.

Who do you think wins the fight between Maycee Barber and Roxanne Modafferi?