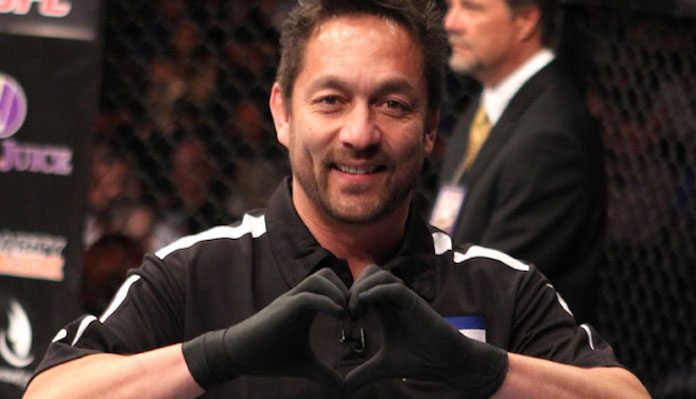 Former UFC official Mario Yamasaki says that he finally might be done with MMA, suggesting that “I don’t know if I’ll still referee again.”

Yamasaki was one of the most-used referees by the UFC for 20 years before UFC president Dana White banned him from officiating events his company promoted following a controversial late stoppage in the Valentina Shevchenko vs. Priscila Cachoeira fight in February 2018. Since then, Yamasaki has not refereed at any UFC events. Last year, however, he announced that he was going to make a comeback and was in the process of re-training to become an MMA official. However, it looks like the ref has changed his mind.

Speaking to AG Fight, Yamasaki admitted that he is no longer interested in officiating MMA matches. According to the Brazilian, officiating was always just a hobby to him, and he’s focused on his full-time job of buying, renovating, and flipping houses.

“After the pandemic, I ended up not chasing that anymore (return to MMA), I don’t think I’ll come back this year and I don’t know if I’ll still referee again. The future nobody knows. But for now, I’m stopped and with no prospect of returning to the UFC. MMA was never my primary job, I have a construction company, I buy and renovate a house, I provide services for large companies.” Yamasaki said.

“MMA has always been a hobby for me, a nice hobby and, of course, if you give me one more chance, I’ll be back next year, no doubt. But it was 20 years in the UFC. This is not for everyone. I did what I had to do. There were trips, they presented me with several opportunities. It was excellent.”

Do you think Mario Yamasaki should never referee again or do you think he should commit himself to re-training and try to make a comeback?