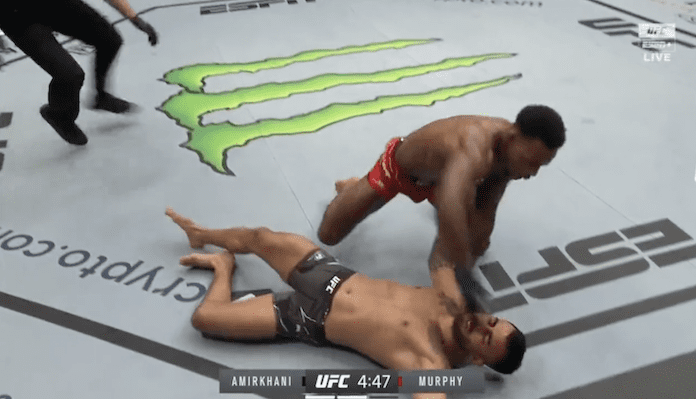 Amirkhani fought undefeated prospect Lerone Murphy in a preliminary card fight that took place on Saturday at UFC 267. Murphy was a big favorite to win the fight, but in the first round, it was Amirkhani who was imposing his will as he took Murphy to the ground and controlled him. It was an easy 10-9 first round for Amirkhani, and for a second there, it was looking like he might pull off the upset as a huge underdog. However, that was not to be, as, in the second round, Amirkhani shot for a takedown and ate a knee for his troubles. It was a perfectly-timed knee finish by Murphy and it knocked Amirkhani out cold.

Damn Amirkhani just got put down by the biggest knee of the year. Congrats Lerone Murphy #UFC267 pic.twitter.com/WQebvYkikd

Taking to his social media following the brutal KO loss, Amirkhani issued a statement following the loss. As far as Amirkhani goes, it was just an “accident at work” and he had nothing but good things to say about Murphy. Amirkhani admitted that being an MMA fighter is a tough job but he says that he wouldn’t do anything else in the world instead.

Makwan Amirkahni: Accident at work and nothing more than the back of the horse. I’m physically completely alive in books, maybe mentally a little broken. It’s a raw profession, but I wouldn’t switch to another. One day feeling is like standing on top of the world and again sometimes you want to get far away from it all. I have to congratulate my opponent Lerone. He was a better player today. Thank you all for the chips. With your encouragement, it’s easy to get back up.

What do you think is next for Makwan Amirkhani following his brutal KO loss to Lerone Murphy at UFC 267?