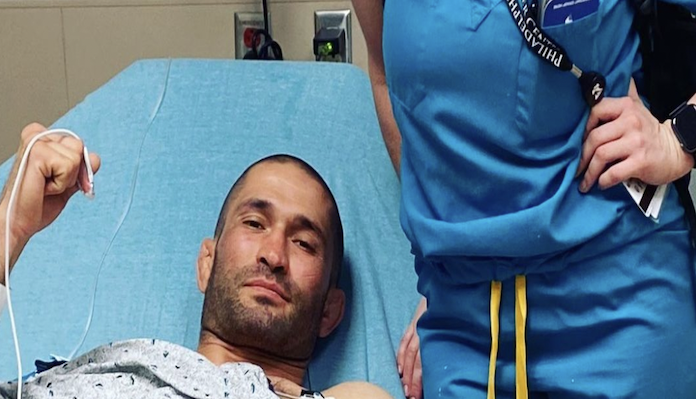 MMA fighter Khetag Pliev has issued a statement after losing one of his fingers at a Cage Fury Fighting Championships fight on Thursday night.

It almost seemed like it couldn’t be real when Pliev lost his finger during his fight against Devin Goodale at CFFC 94. But he in fact did lose his finger during the fight. The photos are not for a weak stomach. It was an absolutely bizarre injury and one that happened apparently as a result of his opponent grabbing into his gloves and causing the injury. Fortunately, the finger was located in a quick fashion and the fighter was able to have it reattached at a hospital. The fighter took to his social media afterward and told fans that he is feeling better, not to worry, and he specifically thanked the doctor for her good work.

My family, friends and fans From the debts of my heart, you and God are my soul motivation! And to me you are all one and the same!!! To the hundreds of you I apologize I’m unable to respond individually but I want to let you know that I am ok. Finger is back in place. Love you all! God bless you all, and this fight is not over yet. Dr. Maggie Wilson did a job

The toughest part about this for Pliev is that he lost the fight due to injury TKO, which is a bad beat considering his opponent was the one who allegedly caused the injury by grabbing into his gloves. As such, the fighter has announced he will appeal the result of the bout with the commission, hoping to get it overturned or deemed a DQ. Either way, it appears as though Pliev’s finger okay and the fighter will live to fight another day.

What did you think of Khetag Pliev losing his finger at the recent CFFC fight?