The opening betting odds have been released for the upcoming welterweight main event between Khamzat Chimaev and Leon Edwards.

Chimaev is one of the hottest fighters in the sport right now. Since making his UFC debut on Fight Island in July, Chimaev has defeated John Phillips, Rhys McKee, and Gerald Meerschaert, all by stoppage. He has been asking the UFC for a big fight since the Meerschaert KO in September, and the promotion was finally able to land an opponent.

After being removed from the UFC rankings this week due to inactivity, Edwards finally accepted the fight against Chimaev. The two will lock horns on December 19 in a five-round main event of a UFC Fight Night event at the UFC Apex in Las Vegas, Nevada. It will no doubt be one of the most highly-anticipated fights of the winter for UFC fans.

With Chimaev vs. Edwards now official, the sportsbooks opened the betting odds for the fight. Check them out below via BestFightOdds. They might surprise you a bit.

Immediate betting action came in on Chiamev as the underdog, and he now currently sits as a -145 betting favorite, with Edwards sitting as a +125 underdog. 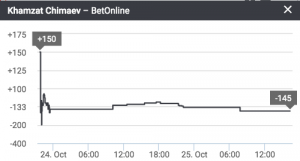 This is a very difficult fight to predict as both men are excellent fighters, with Chimaev still improving every fight and Edwards being right in his prime. The eight-fight win streak and 10-2 record in the UFC by Edwards was likely the reason the sportsbooks gave him the status of betting favorite. But if the early action is any indication, Chimaev will be a popular bet.

Who is your money on, Khamzat Chimaev or Leon Edwards?