The Swedish standout connected with a perfectly timed overhand right that sent Meerschaert crashing to the Octagon canvas in a state of unconsciousness.

The spectacular finish marked Chimaev’s third UFC victory in the past ninety days, this after scoring stoppage wins over opponents John Phillips and Rhys Mckee on UFC Fight Island.

Due to his perfect record and ability to “smesh” his opponents, Khamzat Chimaev has of course drawn comparisons to reigning lightweight champion Khabib Nurmagomedov. 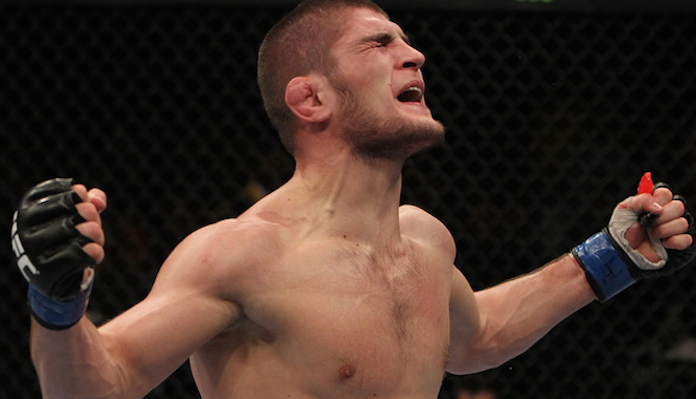 However, Chimaev is not a fan of the comparison, he explained why during last night’s UFC Vegas 11 post-fight press conference.

“Everybody say ‘You Khabib, Khabib No. 2,’ something like that,” Chimaev said (via MMAMania). “But I am Khamzat. I can knock out people. Like, submit the people. Smash the people. Everything. I have everything.”

It was already determined by UFC officials that if victorious against Meerschaert, Khamzat Chimaev would fight former title challenger Demian Maia next.

Oddsmakers have already pegged Chimaev as a massive favorite for the potential Maia fight, one which he would hope to win via submission.

As for Khabib Nurmagomedov, the promotions reigning and undefeated lightweight champion is expected to square off with Justin Gaethje at next month’s UFC 254 event on Fight Island.

What do you think of Khamzat Chimaev rejecting comparisons to Khabib Nurmagomedov? Share your thoughts in the comments section PENN Nation!

This article first appeared on BJPENN.com on September 20, 2020