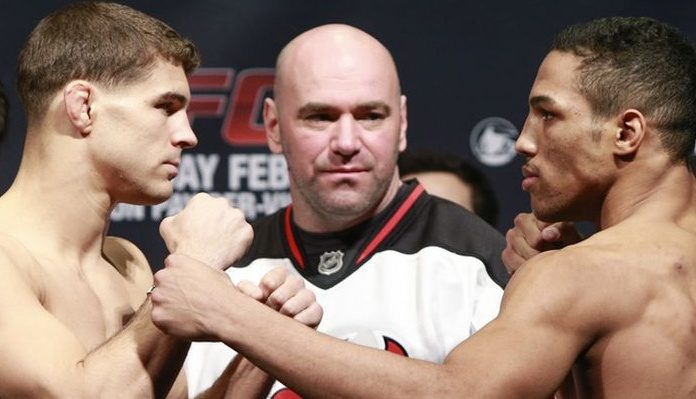 The last big Fox show for the UFC will take place on December 15 in Milwaukee, Wisconsin. As the card takes shape, we now know the headliner.

Iaquinta would be the one to end up walking away with the unanimous decision victory. But now Lee gets his shot at redemption.

As initially reported by the Journal Sentinel, the UFC has confirmed that the rematch between top lightweight contenders in Lee and Iaquinta will be facing off once again but this time in the main event of UFC on Fox 31.

Since their first fight, both men have gained great amounts of experience and fought various top talents. Lee more so as he’s been more active with 12 fights (10-2) to Iaquinta’s 7 (5-2).

Along their ways to this rematch, each man has had their run-ins with two of the division’s absolute best as they fell short but put up good showings. For Lee, he took on Tony Ferguson at UFC 216 as they fought over the interim lightweight crown.

Iaquinta, on the other hand, took on the lofty task of trying to hand Khabib Nurmagomedov his very first career loss on just one day’s notice at UFC 223. Unable to pull off the big upset, Iaquinta lasted the full five rounds and despite not winning a round put up what many believe is the best fight that Nurmagomedov has been given up to this point.

As for the rest of the card in progress, it currently looks like this: