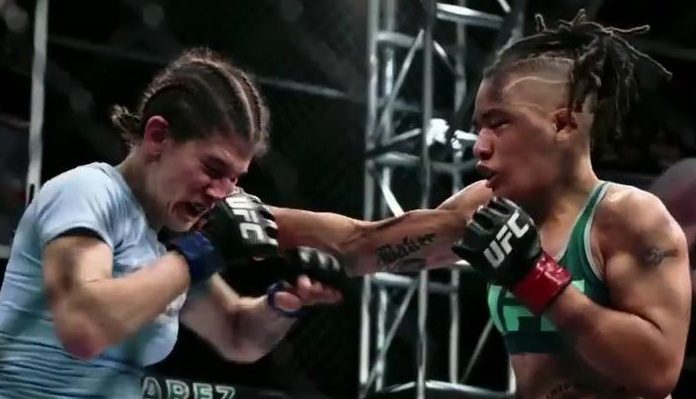 Getting to UFC 230, in general, has just been one of the more wilder rides that the MMA community has witnessed as it’s gotten closer.

After waiting a whole lot longer than we could have imagined, fans and pundits alike began to start just hoping that the event’s big lightweight co-main event between top-ranked contender Dustin Poirier and the returning Nate Diaz should have just gotten promoted up to the headliner.

Despite their efforts to make this happen, the UFC wouldn’t budge.

Which then led to a surprise announcement that the main event would be a vacant flyweight title clash between Valentina Shevchenko and Sijara Eubanks (3-2).

However, after the most recent announcement that a new main event had been booked between heavyweight champion Daniel Cormier and Derrick Lewis, it was also confirmed that Shevchenko and Eubanks were off and Shevchenko would be going back to fight for the title against former strawweight champion Joanna Jedrzejczyk at UFC 231 in December.

In turn, this left Eubanks unhappy to be missing out on the opportunity of a lifetime that was ever so excited for.

Lucky for her, she will still be getting to fight on the big Madison Square Garden event on November 3 as Newsday confirms that Eubanks will take on No. 7 ranked contender Roxanne Modaferri (22-14) in a rematch from The Ultimate Fighter 26 semifinals.

For the veteran and pioneer Modaferri, she has turned herself into one of the greatest career turnaround stories in MMA history.

Initially a participant of TUF 18, Modaferri entered on a five-fight losing streak that would only extend itself following the show. It was after the sixth straight loss that Modaferri would turn things around.

Having gone 7-3 (9-4 including TUF 26) since the losing streak, Modaferri has only lost to some of the very best in the division, including Eubanks who defeated her on their ways through TUF 26.

As it’s been well documented, despite Eubanks earning the upset over Modaferri it would be Modaferri who would get the title shot in the inaugural title bout at 125-pounds in the UFC. This was due to weight cutting complications for Eubanks that caused her hospitalization.

Coming up short in her title shot against Nicco Montano, Modaferri has since gotten redemption against former worldwide No. 1 Barb Honchak who defeated her during her lengthy losing streak. She will now look to even the score with Eubanks as well.