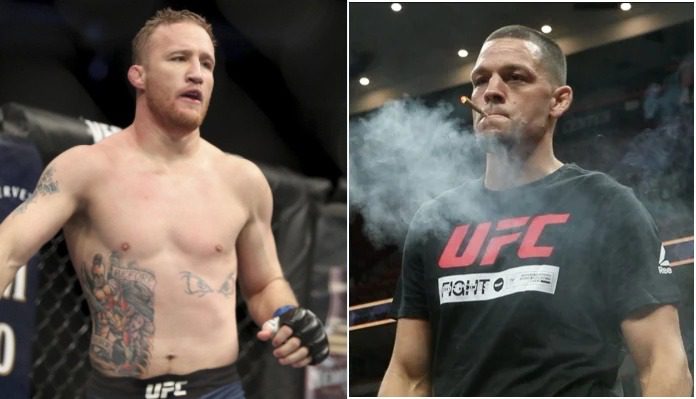 Justin Gaethje has clapped back at Nate Diaz after the ‘Stockton Slugger’ joked about him being put to sleep by a triangle choke from mount.

Gaethje (23-3 MMA) is set to challenge reigning UFC lightweight champion Charles Oliveira (32-8 MMA) in the headliner of next weekend’s pay-per-view event in Phoenix.

Ahead of the contest, ‘The Highlight’ spoke to Megan Olivi where he insinuated that ‘Do Bronx’ will need to “walk through hell like Khabib Nurmagomedov did”.

“[Charles Oliveira] is gonna have to walk through hell like Khabib did. He better be praying every day that he gets me to the ground.”

Gaethje of course squared off with Nurmagomedov for the undisputed lightweight title at UFC 254, where he was put to sleep with a triangle choke in a losing effort to ‘The Eagle’.

Given the definitive outcome in that fight, Nate Diaz took issue with Gaethje’s comparison sharing the following words on Instagram.

“Bruh got triangle choked from mount. What he talkin bout.”

Nate Diaz’s comments clearly did not sit well with Justin Gaethje, who promptly fired back by calling the Stockton native a “jealous bitch”.

I ain’t your bruh you jealous bitch @NateDiaz209

“I ain’t your bruh you jealous bitch @NateDiaz209“

Diaz (20-13 MMA) has not competed since UFC 263, where he suffered a unanimous decision loss to Leon Edwards in a welterweight bout. The Stockton native nearly finished the British fighter in round five of that contest, but wound up being handed the loss after being badly outpointed in the first four rounds.

Since that time Nate Diaz has set his sights on former interim lightweight champion Dustin Poirier. Although both men have expressed their respective interest in the fight, Dana White and company have yet to put the bout together.

Justin Gaethje, meanwhile, will get his second crack at becoming an undisputed UFC champion this Saturday night.