Julianna Pena calls for trilogy match with Amanda Nunes next: “It’s time for her to return the favor”

‘The Venezuelan Vixen’ has been out of action since her rematch with ‘The Lioness’ in July. Their first fight six months prior saw one of the biggest upsets in MMA history, as Pena submitted Nunes in round two. In the process, she ended the Brazilian’s near six-year run with gold.

Despite the upset in the first fight, the rematch at UFC 277 was complete domination by the former champion. While Pena showed a lot of heart, she was battered for five rounds en route to a decision loss. Since then, Nunes has shown an interest in returning to 145-pounds to defend her second title.

In the event that happens, Julianna Pena won’t be happy. The former champion has enjoyed her time out of action, even recently joining the UFC’s broadcast team. However, she’s ready to get back to action.

For her return, the former champion would like a third crack at Amanda Nunes. As Pena explained in an interview with Sports Illustrated, she gave the Brazilian an instant rematch after losing the title. She would like to have the favor repaid. 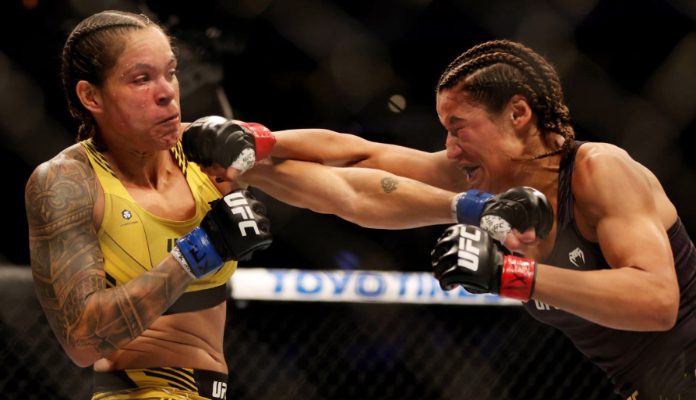 “There’s no other fight I can see,” Pena stated. “I gave her a rematch, immediately, within six months. It’s time for her to return the favor. Not much else needs to be said other than we’re 1-1. This needs to be solved in a trilogy fight. Let’s make it happen.” (h/t Sports Illustrated)

She continued, “Amanda was able to dig deep. Something I find really interesting is that, after she lost to me, there were so many excuses as to why she lost. For me, there are no excuses. I could come up with excuses, but I’m not here to do that. Let’s settle this fair and square in a trilogy.”

This isn’t the first time that Julianna Pena has called for a trilogy with Amanda Nunes. She immediately called for it after her loss in July, but the bout hasn’t come to fruition.

What do you make of these comments? Do you want to see the trilogy? Sound off in the comment section below PENN Nation!

This article appeared first on BJPENN.COM
Previous articleStephen Thompson questioning the UFC’s attempt to have Khamzat Chimaev fight at welterweight: “He should be at 185”
Next articleAljamain Sterling admits that prefers next fight to be against Sean O’Malley over Henry Cejudo: “I like money, money excites me”
© Newspaper WordPress Theme by TagDiv