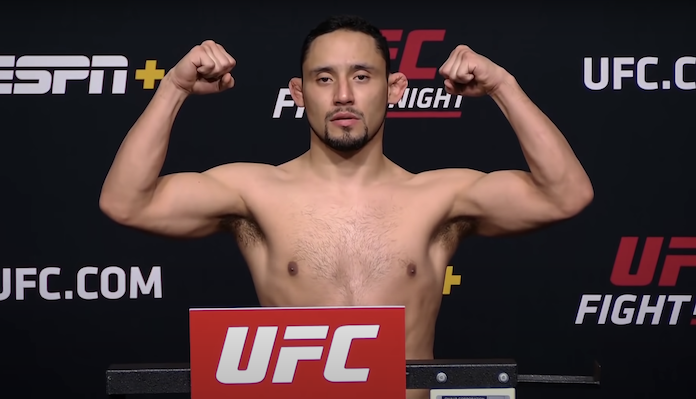 UFC flyweight fighter Juancamilo Ronderos has been suspended for one month by USADA after testing positive for cocaine following his debut.

Ronderos stepped up on extremely short notice to fight David Dvorak at UFC Vegas 27: Font vs. Garbrandt. Not surprisingly, he lost by submission in the first round to one of the better flyweights in the UFC, but what was surprising is that after the fight, Ronderos failed his post-fight drug test for cocaine. USADA suspended him for a month and has released a statement about what happened to Ronderos and why he was suspended for the violation.

“USADA announced today that Juancamilo Ronderos Alvis, of Las Vegas, Nev., has accepted a one-month sanction for a violation of the UFC® Anti-Doping Policy. Alvis, 26, tested positive for cocaine and its metabolite benzoylecgonine as the result of a sample collected in competition at the UFC Fight Night in Las Vegas on May 22, 2021. Cocaine, a non-Specified stimulant, is prohibited in-competition and considered a Substance of Abuse under the UFC Anti-Doping Policy and the UFC Prohibited List. An athlete who discloses the use of a prohibited substance to USADA upon entering the UFC Anti-Doping Program will not be deemed to have committed a violation if USADA determines that a positive test for that substance resulted from the athlete’s use prior to entering the program. Alvis did not declare the use of cocaine on his onboarding declaration forms. Alvis received a reduction to the otherwise applicable period of ineligibility because under the UFC Anti-Doping Policy, athletes may receive a reduced sanction for Substances of Abuse if they can establish by a preponderance of the evidence that the violation did not enhance, and was not intended to enhance, the athlete’s performance in a Bout and they subsequently complete a drug rehabilitation program. Alvis’ one-month period of ineligibility began on May 22, 2021, the date his positive sample was collected. Alvis’ positive test also falls under the jurisdiction of the Nevada State Athletic Commission, which is resolving the case in accordance with its rules.”

Do you think a one-month suspension for Juancamilo Ronderos for cocaine use is fair?