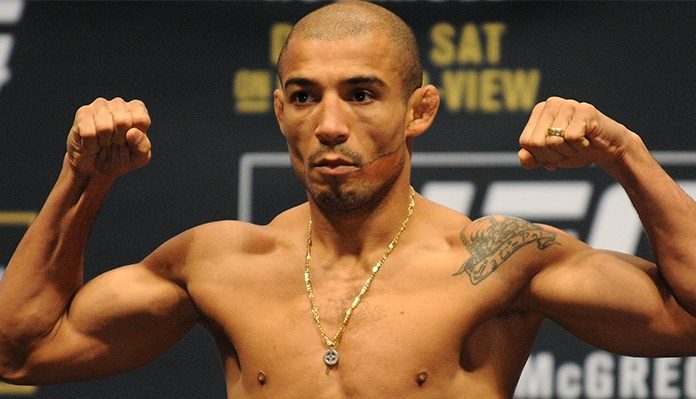 An intriguing bantamweight bout between two of the best fighters in the division takes place at UFC 265 when Jose Aldo meets Pedro Munhoz.

Combate’s Ana Hissa and Raphael Marinho first reported the Aldo vs. Munhoz fight for UFC 265, which takes place on August 7. The card currently does not have its main event set, but Amanda Nunes is expected to defend the UFC women’s bantamweight title in the co-main event or as the third title fight on what could be a stacked card. As well, a middleweight bout between Uriah Hall and Sean Strickland takes place on this card.

Aldo (29-7) is coming off of a big win over Marlon Vera in his last outing which snapped a three-fight losing skid to Petr Yan, Marlon Moraes, and Alexander Volkanovski. Just when the 34-year-old Aldo looked like he was on his way out he picked up a great win over Vera and showed that he’s still at the top of his game. If he can go out there and beat Munhoz, he will likely be booked against another top-five opponent in his next fight.

Munhoz (19-5, 1 NC) is coming off of a decision win over Jimmie Rivera in his last fight to bounce back after two straight decision losses to Frankie Edgar and Aljamain Sterling. The 34-year-old Munhoz has won “Fight of the Night” in three of his last four outings, and this matchup against Aldo looks like it has the potential to be fireworks, as well.

Who do you think wins this bantamweight bout between Jose Aldo and Pedro Munhoz?