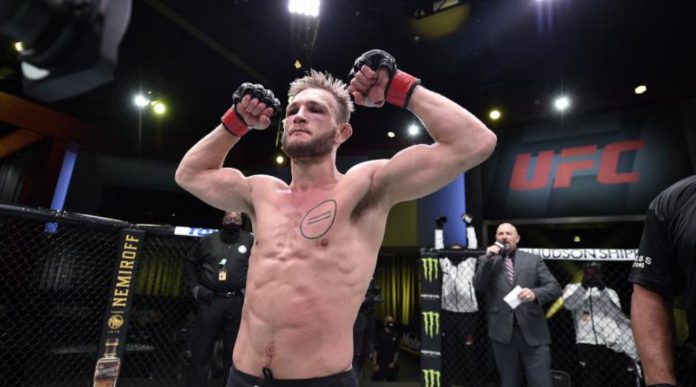 Jonathan Pearce was excited when he got the call about fighting Makwan Amirkhani at UFC London.

Pearce is 3-1 in the UFC but is 3-0 at 145lbs after losing to Joe Lauzon in his promotional debut. He will now get another big-name opponent in Amirkhani, who Pearce is excited to fight.

“I was really excited, I did get COVID at the beginning so it was a bit of a rougher cut but I expect me to go out there and smash it as I always do,” Pearce said on Just Scrap Radio on BJPENN.com. “I think this is a good test for me, he’s a good wrestler but I don’t think he has the run that I have. I’m 3-1, he’s 5-7 in the UFC.”

Against Amirkhani, Pearce believes he has to be careful in the first round. He knows the Fin is the most dangerous in the first few minutes but he is confident he can extend the fight late and gas out Amirkhani.

“I think that is his go-to move, he goes for the quick choke or quick knockout in the first round,” Pearce said. “In a way, I match up perfectly with his style as I lost to Lauzon in the first round and did get caught in a submission in my last fight before getting out of it. But, if you look at my style, I do grow with time and my pace gets better. Once it goes to the second round, I’m going to start taking over.”

If Jonathan Pearce can extend the fight, he is confident he will eventually finish Amirkhani as he doesn’t think the Fin has the will to win as he does.

“Everything can change, but for me, I’m just as good of a wrestler as he is but I just can’t have a bad shot and I have to watch the big knees and left hand,” Pearce said. “He will try and come in and give me his pressure but I’m the better pressure fighter. He might get me down, but I don’t think he has what I have on the feet and he doesn’t have the will to win like I do.”

The goal for Pearce if he does finish Amirkhani is to get another contract and hopefully get one more fight this year and work his way to the top-15.

“It puts me with a new pay cheque and a new contract. Of course, I’d love to run to the top and I could call someone out but in my last two or three fights the guys pulled out,” Pearce said.

Do you think Jonathan Pearce will finish Makwan Amirkhani at UFC London?