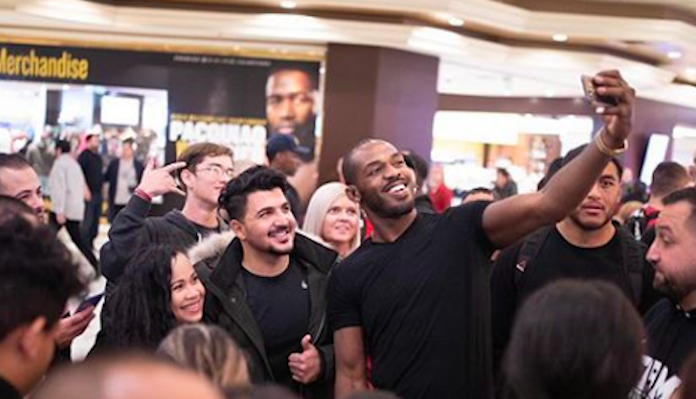 Last night, Jon Jones hosted an impromptu meet-and-greet with his fans in Las Vegas. Jones announced this meet-and-greet on social media earlier in the day.

“What’s up guys, today is Wednesday, December 26, 2018, UFC 232,” he announced. “I just came up with a crazy idea, but hopefully it turns out to be a really good idea. I want to meet some of you fans that came from different countries, different places around America, to shake your hands. So what I’m going to do is, me and my coaches are going to be in the lobby at the MGM Grand from 7:00pm until 7:45. Bring pictures, bring whatever you’ve got, I’ll bring the marker. I’m going to be signing autographs, taking pictures, chatting with you guys, getting to meet you guys and I really hope some of you guys show up. So I’ll see you at the MGM Grand at 7:00, don’t be late because I’m only staying until about 7:45. I have a workout scheduled at 8:00. So I hope that you guys come, can’t wait to meet some of you guys. God bless you, I love you and I’ll see you soon.”

For Jon Jones fans in Las Vegas, this announcement was likely welcome news, as Jones’ anticipated rematch with Alexander Gustafsson has been moved from Vegas to Los Angeles — along with the entire UFC 232 card it’s scheduled to headline.

While many fans are very unhappy that this card was moved, many others seem to be willing to forgive. From the looks of it, Jones had a huge turnout for his impromptu meet-and-greet.

He shared the highlights on social media after the fact.

“Thank you guys so much for showing up to this last minute meet & greet here at MGM Grand,” Jon Jones wrote on Instagram. “Your energy was amazing!! Thought you all hated me, glad to see that’s not the case.”