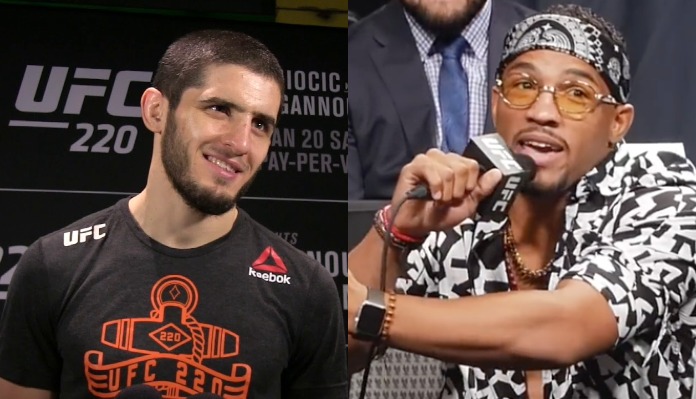 Islam Makhachev believes Kevin Lee took the easy way out by not fighting him.

In the main event of UFC Brasilia, Lee will battle Charles Oliveira which kind of came out of nowhere to many. Especially given the fact, Makhachev and “Motown Phenom” have been going back-and-forth for several months now about a possible fight and it only intensified after Lee knocked out Gregor Gillespie. Both sides seemed interested in the fight but for whatever reasons they could not come to terms.

So, after Lee vs. Oliveira was announced, Makhachev took to social media to slam the American.

@MoTownPhenom so much talking, but you choose easy way out https://t.co/Sa4x71d7vd

“@MoTownPhenom so much talking, but you choose easy way out,” Islam Makhachev wrote on Twitter.

Kevin Lee, as mentioned, returned to the win column last time out with the first-round knockout win over Gregor Gillespie. Before that, he suffered back-to-back losses to Rafael dos Anjos at welterweight and Al Iaquinta. The 27-year-old is 18-5 as a pro and ranked eighth in the division where he also holds wins over Edson Barboza, Michael Chiesa, and Francisco Trinaldo among others while also fighting for the interim title in 2017.

Islam Makhachev, meanwhile, is on a six-fight winning streak dating back to September of 2016. He is 18-1 as a pro, including being 7-1 inside the Octagon but is ranked 15th at lightweight. In his last fight, he edged out a decision win over Davi Ramos. The Russian also has wins over Nik Lentz and Gleison Tibau among others.

Although Islam Makhachev believes Kevin Lee took the easy way out by taking on Charles Oliveira, the Brazilian is ranked at 13. He also holds the UFC record for most submission wins and is riding a six-fight winning streak with all coming by stoppage.

What do you make of Islam Makhachev saying Kevin Lee took the easy way out by accepting Charles Oliveira bout? Sound off in the comment section, PENN Nation!