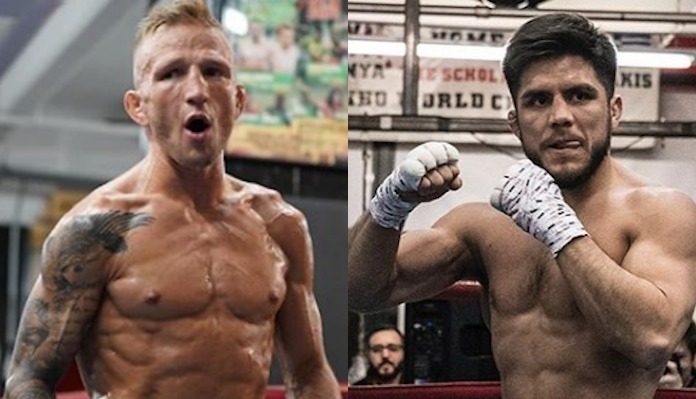 Former UFC bantamweight champ Henry Cejudo is teasing a comeback after some trash talk from his former opponent TJ Dillashaw.

Dillashaw and Cejudo have fought once before. They met in early 2019, when Dillashaw, then the bantamweight champion, dropped down to flyweight to challenge Cejudo for that division’s title.

After Cejudo defeated Dillashaw by first-round TKO to defend the flyweight title, Dillashaw tested positive for EPO and was stripped of the bantamweight belt. Cejudo then defeated Marlon Moraes to claim the vacant bantamweight strap, and after a successful title defense against Dominick Cruz, retired from MMA.

Despite the fact that Dillashaw has been out for two years due to a suspension and that Cejudo is ostensibly retired, the pair have not shied away from trash talking one another. Their latest verbal skirmish occurred after Dillashaw did an interview with ESPN, the official broadcast partner of the UFC.

In his interview, Dillashaw called into the question Cejudo’s previous title reign, as well as that of the division’s current champ, Petr Yan.

“How are you calling yourself a champion? You’re an interim champion.”

Based on the opponents they faced, @TJDillashaw doesn’t feel Petr Yan or Henry Cejudo were true bantamweight champions 👀 (via @bokamotoESPN) pic.twitter.com/FMm8VPzP6y

“I want that title,” Dillashaw said. “I want it right away, because you’ve got a guy, Petr Yan, that beat someone for the belt that was 0-2 in the division. Jose Aldo has two losses, and he beat him for the title. How do you call yourself a champion? To me, you’re an interim champion.

“Even when Cejudo came in and won, he beat Moraes, and shoot, Moraes was no champion,” Dillashaw added. “[Cejudo] beat a guy that wasn’t the champion to get the bantamweight belt. [Moraes has] got the cardio of a French bulldog. All you have to do is outlast him for a round and he’s able to beat him. He beat him, then he beat Cruz coming off the couch and ready to retire, and now he wants to be a champion? He leaves, now Petr Yan beats a guy that’s 0-2? I mean to be honest, man, the weight class is f**ked up. I’m ready to throw a wrench in it all and get my belt back.

“I will be the most dominant,” Dillashaw concluded.

Unsurprisingly, it didn’t take long for Henry Cejudo to catch wind of this comment. In his response, he echoed Dillashaw’s disappointment with the state of the bantamweight division, and teased a comeback of his own.

This deserves a lol 😂! At least @TJDillashaw gets it, not like flavor Flave stunt double @funkmasterMMA who wants to butter up @PetrYanUFC potato head. Skip him and give it to TJ. And I might just make a comeback. In all you guys all suck! 🏆🏆🏆 merry Christmas 🎁🎄 😘 https://t.co/xJ5d6ts0j8

What do you think of this back-and-forth involving Henry Cejudo and TJ Dillashaw?