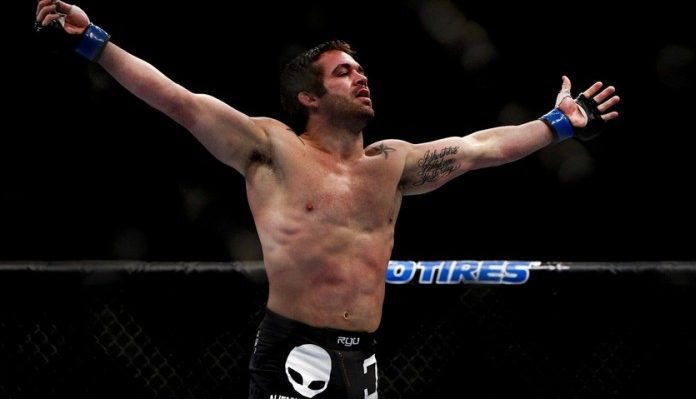 When scanning through the history of the lightweight division in MMA, it can’t be viewed without seeing the name ‘Jamie Varner’ pop up at least a handful of times.

A former World Extreme Cagefighting (WEC) champion that holds one of MMA’s greatest upsets and multiple of the night accolades, Varner was a fighter’s fighter. But bad business arguably steered his career in different directions than it could have been had things been executed in other manners.

In 2008, Varner would earn the WEC championship by TKOing ‘Razor’ Rob McCullough in the third round of their title fight. The fight that Varner claims as his proudest career moment.

He would go on to successfully defend his title twice against the likes of Marcus Hicks and Donald ‘Cowboy’ Cerrone before a year-long layoff would lead to him dropping the title against future UFC champion, Benson Henderson.

Six months after that, Varner would take on Kamal Shalorus in a fight he wasn’t interested in before rematching with Cerrone in Cerrone’s home state of Colorado.

The Shalorus and Cerrone rematch were roughly three months apart.

“I wanted to take like six months off [after the Shalorus fight],” Varner shared on the Splendid Science of MMA podcast. “But [the WEC] told me if I didn’t take that fight [with Cerrone] that they would sit me out for a year. So it’s like… My hands are tied, I had to fight. And I had already sat out a year and I lost my fight to Benson Henderson. Back then I was making like $17,000 show, $17,000 win as a champion. There was no negotiating with that company, dude. They were bullies and it was tough.

“But ultimately I made a pretty successful life for myself outside of fighting and I think that the things with the Kamal Shalorus fight and the things early on in the WEC honestly kind of forged me into the man I am today and I feel like I’m hard as nails now.”

That year of 2010 when he fought Henderson, Shalorus, and Cerrone was the last year of Varner’s WEC tenure as he went 0-3-1. Something that he attributed to a mental shutdown that could be compared somewhat to Francis Ngannou’s after he fought Stipe Miocic.

The difference for Varner was just that his was triggered outside of the cage rather than in it.

“Dealing with the business of competition… Of the WEC and the UFC, that took the wind from my sails,” Varner explained. “I am a pure competitor. They under-compensated me, they treated me like sh*t and that bugged me. Cause I’m such an emotional person. And I was young and emotional. It’s one thing to be an emotional person but now I’m 34-years old, I can control ’em and see through all the bullsh*t. But back then, I was young. I didn’t know how to deal with it.

“I resented them, I resented the company and I fought and did stuff because I felt like it was what I was supposed to do and what people wanted me to do but I didn’t want to fight. They had burnt me out, man. They had taken all the fun and life from fighting and competition, and they treated me like sh*t, dude.”

“No employee wants to go to bat and die for his employer,” Varner continued. “And the [second] Donald Cerrone fight, that was probably 50 percent of me. The Shane Roller fight [after that], I didn’t even care. I didn’t care about those fights, man. They just treated me like such sh*t I wanted out.”

Looking back on things, the Cerrone and Varner rivalry was one of biggest in WEC’s history and one that attracted a lot of attention.

As big of a fan favorite as he is to this day, there’s no denying that the rivalry with Varner helped build that early on for Cowboy. But Varner doesn’t believe it came completely naturally.

“The f*cking WEC marketing machine pumped [Cerrone] up and put me down, kept me hidden,” Varner stated. “They didn’t promote me, they didn’t tell a story.

“When Urijah Faber broke his hand in the second Mike Brown fight, they cut his glove off, they showed the crowd his hand was broken… I broke my hand in the very first f*cking round of that [first] Donald Cerrone fight. The very first round. I fought four more rounds with a broken hand. In the fourth round, I broke my left foot kicking him in the face. They didn’t cut off my glove, they didn’t show the world that. They didn’t talk about that, they didn’t promote that.

“They just picked their favorites, man,” Varner continued. “And one… I was emotional, and I spoke out against them, I called it like it was. And because I did that they’re like, ‘f*ck you'”

Life after the WEC wasn’t the worst for Varner, however. After going 3-1 in XFO, XFC, and Titan FC bouts (collectively), Varner would get his shot in the UFC which had by this point absorbed the WEC.

In his promotional debut, he would score the upset of 2012 by finishing current perennial top 10 contender Edson Barboza via strikes in the opening round.

Following the big win, he would have 2012’s fight of the year as well when he took on Joe Lauzon at UFC on Fox 4.

Although he would never again reach the top of the lightweight mountain, Varner would leave it all on the line each and every time out.