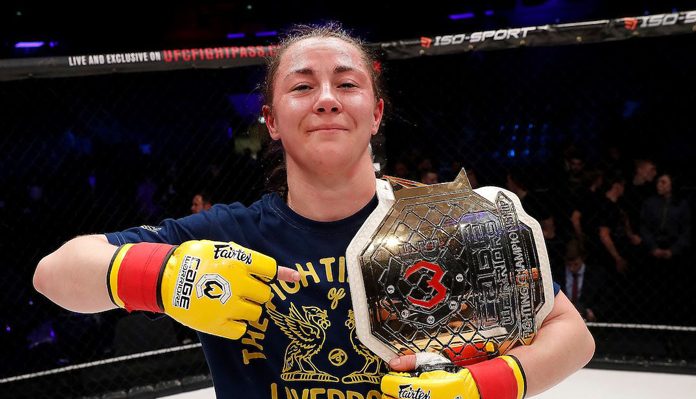 The pay for fighters in the promotion has come under fire over the last few years. Led by names such as Jake Paul, there’s been a push for more pay for UFC fighters. Recent estimates have shown that fighter compensation as a percentage of event revenues is around 20%.

For comparison, Bellator fighters make 44.7% of the company’s revenue. Other sporting leagues such as the NFL and NBA hover around 50%. Recently, the fighter pay argument has arisen after Dana White gifted $250,000 to a member of the Nelk Boys.

While some may criticize UFC fighter pay, UFC flyweight Molly McCann believes the promotion has its benefits. In a recent interview with Skybet alongside Paddy Pimblett, the two discussed the promotion’s pay issues. The two fan favorites are expected to return this weekend at UFC London.

While ‘The Baddy’ has criticized his own pay, ‘Meatball’ is much more reserved. In the interview, the 32-year-old discussed the benefits of being with the UFC. The women’s flyweight contender praised the UFC performance institute, as well as how they’re given free food and hotel stays.

“No other promotion would fly you around the world [and] put you in the five-star hotels. When you arrive, you send them your weight and they’ll come up with a refeed program, they’ll give you food all of the week, they’re with you non-stop.” (h/t SportsKeeda)

Molly McCann continued, “Then you’ve got the Performance Institute, which is like the EIS [English Institute of Sport]… we’ve got one in Las Vegas where you’re allowed to go and use for free, so you’ve constantly got free physio [therapy], strength and conditioning programs…”

What do you think about Molly McCann’s comments? Sound off in the comment section below!