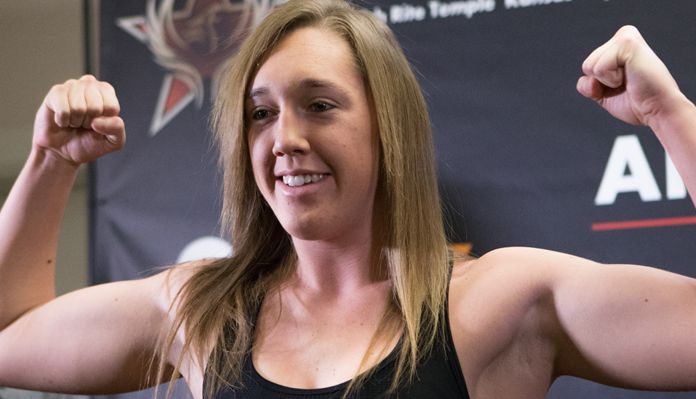 For most competitors on The Ultimate Fighter (TUF) the goal is to win the show and earn a UFC contract. However, TUF 28 fighter Leah Letson didn’t have that worry. No matter how she did on the show, she was guaranteed to fight in the UFC.

“Mine was a little bit of a different story, just because I am already signed to the UFC. My coaches called me and told ‘hey they are asking if you want to be on TUF, do you want to do it?” So it was more of a decision if I wanted to do it,” Letson said to BJPENN.com. “After I talked to my coaches we thought it was a great opportunity to get my name out there and get some exposure. And, get some ring rust off because it had been a year and a half since I fought. I knew the fights wouldn’t count on my record. I knew no matter how I did on the show I would still have my UFC contract. It was a win-win situation for me. It was a pretty cool opportunity that I got presented that I definitely wanted to take up.”

However, it wasn’t always easy inside the TUF 28 house. Many fighters were visibly mad at Letson for competing on TUF when she already had a UFC contract. All the fighters are putting their lives aside and working for that contract, while Letson already has one. It put her in an awkward scenario inside the house.

“I got a little bit of a cold shoulder at first when they found out I was already signed to the UFC,” said Letson. “They were all competing for that contract. I think it definitely helped me mentally because I was stressed out as enough being in the house, but just knowing I don’t have as much pressure as these other fighters do because I already have the UFC contract. Worst case scenario, you don’t win the show and you still have the opportunity to prove yourself in the UFC. It helped me mentally in the house, at first the other fighters weren’t too happy that I already had a UFC contract.”

Knowing no matter what happened on the TUF 28 show she would be fighting in the UFC made it easier. On the show, the focus was making herself a better fighter, something she believes she has accomplished.

“Definitely. It was mentally challenging not having coaches around, especially my coaches cause we are connected, my coaches are like my brothers,” added Letson. “We are always talking and on the same page. To then, not having anyone around to coach you or help you out, you definitely learn a lot about yourself. I’m a better fighter because of it.”

However, it wasn’t easy for Letson. On the TUF 28 show, she was visibly frustrated with coach Robert Whittaker and his training style. The coaching was not up-to-par with Letson and the training intensity was not very good.

“I wasn’t exactly happy with the level of training that I was getting on the show. My teammates and I all felt that our training wasn’t very intense,” said Letson. “Kelvin’s team got really good quality, high-intensity training, and good technical skills. Whittaker, we really didn’t do much of any hitting pads. We basically shadow boxed a lot and did some jiu-jitsu technique, but there wasn’t any high-intensity training.

“I honestly don’t know why he didn’t let us train (the way we wanted). We had asked him multiple times, ‘hey can we hit pads, can we spar?’ and he would turn us down. None of us really understood why and I still don’t understand why. Honestly, I don’t know. We asked multiple times and we got told no every single time.”

“I was able to do well on the show even without coaching,” she added.

Ultimately, it frustrated Letson to the point that she was considering switching to Kelvin Gastelum’s team. However, Letson pushed through the adversity and is happy she did. Now, once the TUF 28 show ends, Letson will make her UFC debut. But what division it will be in is still up in the air.

Ultimately, Letson could have chosen to not compete on TUF 28 and would have already made her UFC debut by now. However, being on TUF was good for her, but if she had a choice to do it again, the answer is simple.

“It is one of those things that I am glad I did it but I wouldn’t want to do it again. I don’t think I would do it again,” she said.

No matter how the TUF 28 show goes for her, the goal stays the same. Leah Letson is continuing to work on getting better and plans to go out and win her first UFC fight. TUF was a place to get her name out, and she certainly did that and could be a title contender at featherweight after the show.