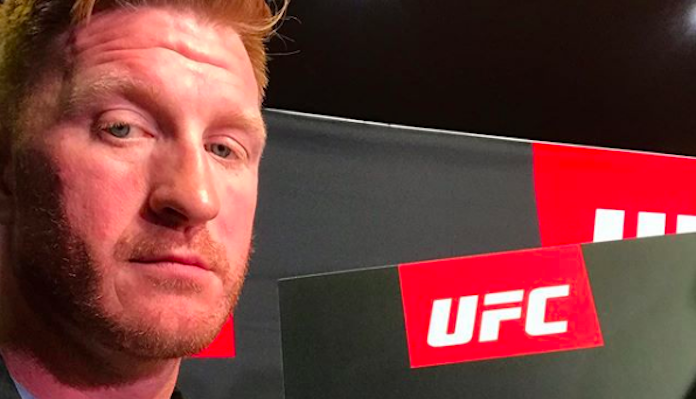 UFC light heavyweight Ed Herman has fired back his haters and at UFC commentator Michael Bisping after a recent controversial win.

Herman took on Mike Rodriguez at UFC Vegas 10 on September 12. Mid-way through the fight, the action was paused when Herman seemed to absorb a low blow. An instant replay, however, revealed that the strike was clean.

After taking several minutes to recover, Herman returned to the fight, and ultimately wound up winning by third-round submission.

While it was an undoubtedly an impressive comeback, it was somewhat tainted by the fact that he was allowed to recover from what otherwise might have been a fight-ending blow.

Speaking to MMA Fighting, Herman opened up on this victory, explaining that he’s received a lot of hate since its happened. Some fans even targeted his wife on social media.

Despite the blowback he received, he feels his win still goes down as one of the greatest comebacks in UFC history.

“I feel like I just had the most epic comeback in UFC history,” he said. “I was hurt badly multiple times and was able to recover and come back and get that victory. Whether the ref gave me a break or not, who’s to say what would have happened?

“I’m not saying he wouldn’t have an opportunity to finish me, but I definitely would have been able to continue,” he said. “I’m going to continue if I can breathe. A lot of people fold up shop when the odds are against them. That’s why I’ve been doing this so long.”

Herman also took issue with the comments of UFC commentator Michael Bisping, who he got to know on season three of The Ultimate Fighter. During the broadcast, Bisping shared some comments downplaying Herman’s win, and Herman would happily settle his differences with the Brit in the cage.

“Bisping I think is kind of a punk, because to my face, he acts like he’s my buddy, and then kind of came after me and made me look bad and talked some trash, so it’s kind of messed up,” Herman said. “If he wants to come out of retirement and throw the gloves on, we can do that.”

Do you think Ed Herman deserved the W at UFC Vegas 10?