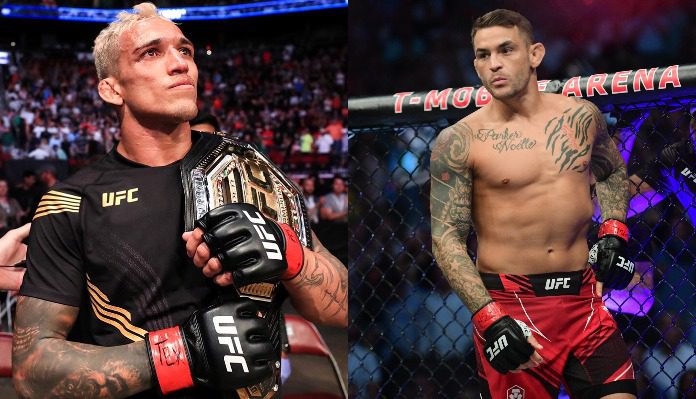 Dustin Poirier has confirmed that he will be honoring his pledge of donating $20,000 to a charity of Charles Oliveira’s choice.

Back at UFC 269, Charles Oliveira submitted Dustin Poirier to successfully retain his UFC lightweight championship. The back and forth first round was followed by an emphatic second round performance from “Do Bronx”, leaving Poirier to wonder what’s next for him in the UFC.

In the immediate aftermath of the main event we saw Poirier declare to Oliveira that he wanted to donate $20,000 to a charity of the Brazilian’s choosing. Now, almost a month later, “The Diamond” has provided fans with an update on proceedings.

For anyone asking about the $20k donation I promised, of course I'm going to honor it! We have been in contact with Charles and his team. We are waiting for them to figure out what project they want it donated to.

💎 @DustinPoirier just donated $20,000 to a hometown charity of @CharlesDoBronxs choice.

Being a champion doesn't begin and end with twelve pounds of gold. #UFC269 pic.twitter.com/y4AElHBkX4

“For anyone asking about the $20k donation I promised, of course I’m going to honor it! We have been in contact with Charles and his team. We are waiting for them to figure out what project they want it donated to.”

Both men showed a great deal of class before and after the fight which has been a regular component of their personalities throughout their respective careers. Moving forward, they’ll continue to follow the same path – and we’d be intrigued to see if a rematch between them is ever booked.

Charles Oliveira is currently gearing up to face Justin Gaethje or, in a potential twist of fate, Conor McGregor. On the flip side, Dustin Poirier has been teasing the idea of a showdown with long-time rival Nate Diaz, or perhaps even a permanent shift up to welterweight for the final chapter of his prime.

There are plenty of options on the table and that’s just the way fans like it.

Who do you think will be the UFC lightweight champion at the end of 2022? How impressive was Charles Oliveira’s win over Dustin Poirier? Where will the 155-pound division go from here? Let us know your thoughts on all of this and more down in the comments, BJPENN Nation!