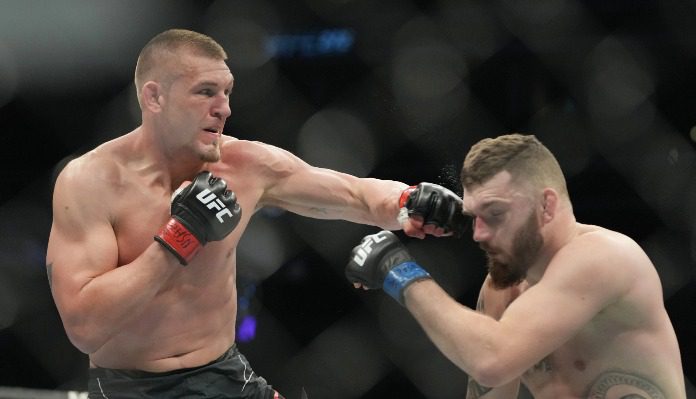 Dustin Jacoby is happy he overcame adversity to beat Michal Oleksiejczuk at UFC 272.

Jacoby entered the fight with a foot injury that limited him throwing kicks, and he says for the first time in his career he thought about pulling out. However, he decided to take the fight and after landing a kick early, he realized he wouldn’t be able to throw another one for the rest of the fight.

With kicks being a big part of his game plan, Jacoby began to focus more on his hands and the clinch which he did effectively to get the win.

“My kicks were limited going in there as I threw one kick in the first 20 seconds and it hit my foot wrong so I knew I couldn’t throw anymore,” Jacoby said to BJPENN.com. “I then started just worrying about my hands and then I caught him early in that second round and I controlled the fight from that point on. While it was a very competitive fight, I felt very confident I won the fight. After the fight, even though I did win, I was a bit disappointed as I wanted to get a finish but after watching it again, I was happy with my performance.”

After Dustin Jacoby got the decision win, he improved to 4-0-1 since his return and now sees himself ranked at 15 which he says was surreal.

“It was super cool to see myself ranked 15th at light heavyweight,” Jacoby said. “That was super cool, a huge accomplishment in my career, and just shows that I’m doing the right things.”

With Jacoby being ranked now, he says the plan is to return in July, hopefully at International Fight Week, and wants Ryan Spann next.

“I need to heal my foot up a little bit but I do feel healthy as nothing major. To me, a good timeframe is early July, hopefully, that International Fight Week pay-per-view card in front of the fans again,” Jacoby concluded. “I think Ryan Spann would be a great fight, he’s ahead of me in the rankings and it would be a fun fight for the fans. If I beat him, then I get a top-10 guy and start my climb up the rankings.”

Would you like to see Dustin Jacoby vs. Ryan Spann next?