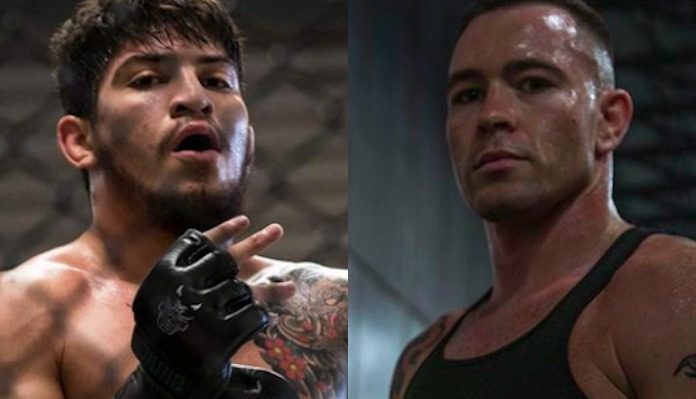 Colby Covington impressed many people with his performance against Robbie Lawler on Saturday, but Dillon Danis was not one of them.

Covington (15-1 MMA) dominated Lawler for twenty-five straight minutes on route to a unanimous decision victory in the headliner of UFC Newark.

However according to Bellator’s Dillon Danis, Covington’s performance was nothing short of ‘sloppy’. After watching the fight, Danis believes he would put a beating on ‘Chaos’.

Colby is so sloppy i thought I was watching ufc 1 with those choke attempts 😂 if we fought the cops couldn’t even save him from the beating i would put on his bitch ass.

“Colby is so sloppy I thought I was watching UFC 1 with those choke attempts if we fought the cops couldn’t even save him from the beating I would put on his bitch ass.”

Dillon Danis currently holds an undefeated professional record of 2-0, but has yet to face any top caliber opponents.

This is not the first time that Covington and Danis have gone at it on social media, but following his win over ‘Ruthless’ this evening, Covington clearly has bigger fish to fry, most notably in the form of current UFC welterweight champion Kamaru Usman.

‘The Nigerian Nightmare’ and Covington came face to face at tonight’s UFC post-fight talk show, and things got heated immediately (see that here).

The pair are now expected to meet later this fall, possibly at UFC 244 on November 2 in New York, for the promotions undisputed welterweight world title.

As for Dillon Danis, the brash Bellator fighter is currently awaiting his next assignment.

Colby Covington has yet to respond to “El Jefe”, but knowing ‘Chaos’ a response is likely imminent.

What did you think of Colby Covington’s performance against Robbie Lawler at today’s UFC Newark event? Do you think Dillon Danis would stand a chance against the promotions former interim welterweight title holder? Sound off in the comments section PENN Nation!

This article first appeared on the website BJPENN.com August 4, 2019