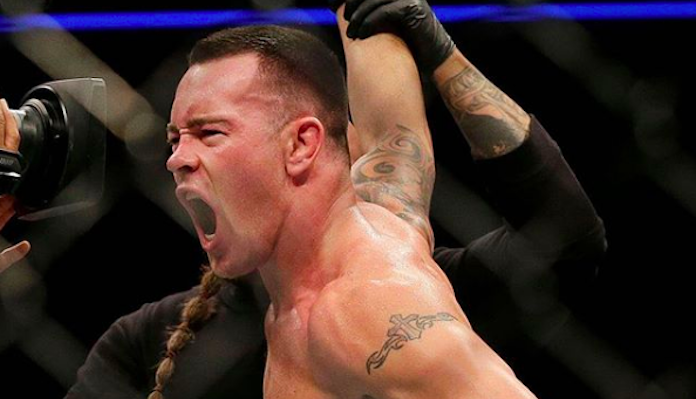 The promotions former interim welterweight champion, Colby Covington (14-1 MMA), returns to action for the first time since defeating Rafael dos Anjos via unanimous decision at UFC 225 in June of 2018.

‘Chaos‘ will enter tonight’s UFC Newark headliner on a six-fight win streak and has been promised a title shot against Kamaru Usman if he proves victorious this evening against Lawler.

Meanwhile, former UFC welterweight champion Robbie Lawler was most recently seen in action at March’s UFC 235 event, where he suffered a controversial first round submission loss to Ben Askren.

‘Ruthless’ has gone just 1-3 over his past four Octagon appearances, with his lone victory in that stretch coming over Donald Cerrone.

Round one of the UFC Newark main event begins and Colby Covington tries to get inside and shoot early. Robbie Lawler defends and fires off a flurry. The crowd is getting behind Lawler early. Covington dives in for a double leg. He tries to slam Robbie to the floor but Lawler defends and is able to keep the fight standing. Covington continues to work and scores a single leg takedown. Covington looks to take the back of Lawler. Robbie connects with an elbow. ‘Chaos’ is just relentless here early. He takes Robbie’s back and looks to lock in a rear-naked choke. Lawler defends and so Colby switches to punches. Chants of “Robbie” fill the arena. ‘Ruthless’ scrambles back to his feet and lands a low kick. Colby Covington continues to press forward and lands a knee. He shoots in and scores an easy takedown. One again Colby looks for a rear-naked choke. Robbie scrambles and gets back to his feet but eats a combination for his efforts. The horn sounds to end round one.

Round two begins and Covington misses with a high kick. Colby goes low and then attacks with a flurry. He shoots in and scores a takedown. ‘Chaos’ immediately begins working for a choke. Robbie scrambles back to his feet. Colby still has him pressed against the cage. Covington just misses with a spinning back elbow. Robbie circles off the fence and lands a low kick. Colby shoots in and scores another takedown. He is making this look effortless. Lawler gets back to his feet but Covington lands an uppercut and then another. Back down goes Lawler and Covington is now on his back. Robbie scrambles and gets back up to his feet. He lands a left hand but Colby answers with an uppercut and then a body kick. Robbie Lawler comes forward with a lead right. Colby Covington replies with a hard kick to the body. Robbie is applying pressure now but can’t seem to get anything going before the horn sounds to end round two.

Lawler starting to let his hands go in round 3! #UFCNewark pic.twitter.com/Dic8CTeBWk

Round three of the UFC Newark main event begins and Colby Covington shoots in and scores an early takedown. Lawler gets back up to his feet but ‘Chaos’ drags him back down to the canvas. ‘Ruthless’ once again gets back up to his feet and now lands a left. Good shots from both men in the pocket. Lawler with a lead right and then an uppercut. Covington shoots for a takedown but Lawler sprawls and defends. Robbie with some good shots to the body now. Colby replies with a knee. An uppercut lands for Lawler. Both men swing big punches in the pocket. Colby Covington with another double leg attempt. Lawler defends and circles out. Colby with punches in bunches now. Lawler with a low kick. He tags Covington with an uppercut. That appears to stun Colby but still the former interim champ continues to force the action. Both men connect with jabs up the middle. Covington lands a pair of body kicks. Another body kick from Colby before the horn sounds to end round three.

Round four begins and Colby Covington comes out with a combination. Robbie slaps him with a jab and then a left hand over the top. ‘Chaos’ responds with a left hand. Lawler goes low with a kick. Covington pressures him against the cage and shoots in for a takedown. Lawler defends and lands a hook to the body. Both men fire off shots from the pocket. Covington looks for a takedown but it is not there. Colby with a flurry now. Lawler answers but it is only with one punch. Covington’s volume is incredible. He lands a knee followed by an uppercut. Colby shoots in and scores a double leg takedown. Robbie scrambles back to his feet but Covington has him pressed against the cage. One minute remains. Covington with a good elbow from the clinch. Lawler tries to break free but can’t. More shots from in close by Colby Covington. Lawler responds with an uppercut but then eats a three-punch combination. Covington continues to press before the horn sounds to end round four.

The fifth and final round of the UFC Newark main event begins and Colby Covington opens with a good combination. He lands a hard kick to the body of Lawler. Robbie lands a straight right. He goes to the body with a jab but Covington replies with a knee. Colby shoots in for a takedown and lands a knee. Robbie circles off the fence and looks to come forward with offense. He lands an uppercut but Colby responds with a knee and then a flurry of shots. Robbie looks to find a home for his left hand. Colby does a good job rolling with the shot. The fighters exchange jabs and then clinch. Robbie Lawler breaks free and circles out. ‘Ruthless’ with a good right and then a left to the body. Colby smiles. 90 seconds remain. Lawler connects with a good jab and then another. Covington paws with his jab to keep Lawler at bay. Robbie needs something big here. He just can’t seem to find a way inside. Robbie loads up on a right but misses. The horn sounds to end round five.

Who would you like to see Robbie Lawler fight next following his loss to Colby Covington at tonight’s UFC Newark event? Sound off in the comments section PENN Nation!