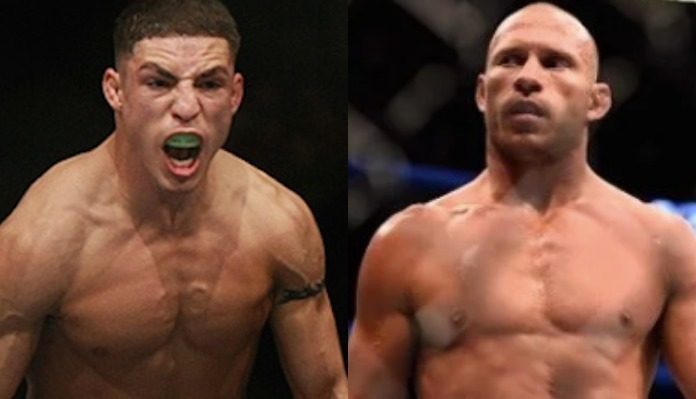 Diego Sanchez did not hold back while addressing Donald Cerrone’s recent knockout loss to Alex Morono at UFC Vegas 26.

Sanchez and Cerrone were originally slated to co-headline last weekend’s event in Las Vegas. However, following an altercation between Diego’s coach and mentor Joshua Fabia and UFC officials, ‘The Nightmare’ was handed his walking papers from the promotion.

‘Cowboy’ was then re-booked to fight Alex Morono, but ultimately went on to lose the bout by first round TKO.

Prior to being defeated by ‘The Great White’ at last Saturday’s event, Donald Cerrone shared the following thoughts on Diego Sanchez’s UFC release.

“It’s hard to be mad at him now because I don’t think it’s him guiding the horse,” Cerrone said at media day. “I think he’s just running blind, and this other jamoke, his new lover, is showing him down the path. I don’t know, (I) can’t really be mad at the kid, or the old man, I should say. But really it’s his cult leader and lover that took over his life, and I feel bad for you, Diego.”

Now following Cerrone’s loss to Morono, Diego Sanchez took the opportunity to fire back at his former training partner.

“Maybe @cowboycerrone training methods should be questioned??” Sanchez said on his Instagram story (via LowKickMMA). “Racing, mountain biking, wakeboarding, snow mobiling, hunting, shooting, Jerky selling, traveling like a rockstar and chewing with Monster drink….hope Donald the bigot gets taken to the hospital to protect his head he said needed healing.”

UFC President Dana White recently confirmed that he will be giving Donald Cerrone one final fight in the promotions lightweight division.

As for Diego Sanchez, the former TUF 1 winner is still searching for a new home after being cut by the Ultimate Fighting Championship.