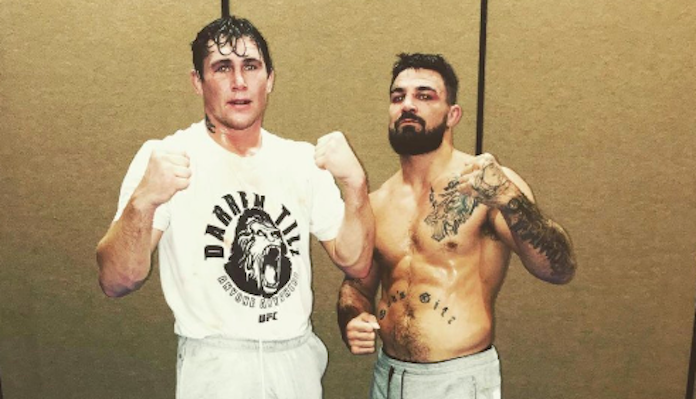 UFC middleweight contender Darren Till has opened up on his infamous sparring session with outspoken welterweight star “Platinum” Mike Perry.

Till and Perry got a few sparring rounds in in 2018, after they crossed paths outside a hotel. While Till famously thought Perry was inviting him to the spa, he agreed once Perry had clarified his request.

“He comes up to me outside the hotel reception, he’s like, ‘Are you up for this later, this spar?’” Till recounted on the Anything Goes with James English show (via MMA Fighting). “I said, ‘Yes, I am. Whatever time.’ He turned around and went, ‘I haven’t got no gloves.’ I went, ‘What? What do you mean? You want to ‘spa?’ I thought you wanted to go to a spa.’ And he’s like f**king mental, he’s looking at me all confused, and I went, ‘Yeah, if you want to spar we can spar.’

“Later on that night he messaged me, ‘Are you ready?’ I was like, ‘Yeah champ, let’s go.’ Went down to the gym in the hotel and we done like five rounds of sparring,” Till added.

“I’ll never, ever say,” Till said. “Never, ever say. I don’t think—he’s actually said loads of times, ‘I beat Darren, I busted his face up.’ If that makes him feel good and sleep at night, that’s great for him, but this is the thing. I could go to Tyson Fury’s gym now and beat him up in a spar – he’s actually come to my gym and we sparred and I took him down, I’m an MMA fighter – [and] imagine me going around saying, ‘I beat Tyson in a boxing spar today.’ That spar means absolutely f*ck all, jacksh*t, you didn’t get paid for it. No one’s seen it. Sparring’s different. You don’t have the nerves, the crowd, everything involved.

“So for me to sit here and go, ‘I won Mike Perry in the spar,’ that’s bullsh*t, because even if I did or I didn’t it doesn’t mean a thing, because we could fight and he could just go ‘boomf,’ knock me clean out,” Till add. “What really matters? The spar that I beat on him or the knockout that he just placed on me in front of everyone? He’s come out and said loads of times, ‘I battered Darren in that spar.’”

While Till and Perry now compete in different weight classes, they frequently trade trash talk on social media. Till, however, doubts they’ll meet in the cage anytime soon.

“Don’t get me wrong, I love the feud with Mike Perry, but—not to be disrespectful—he’s nowhere near to be getting a fight with me,” Till said. “He’s not even ranked. He needs to beat people first before he fights me. I’m fighting the elites, I’ve fought the best, beat the best, and been beaten by the best. He’s not close. He’s not my weight, he’s not fighting the best – we’ve just got a little tit-for-tat feud going on.”

Do you want to see Darren Till and Mike Perry fight in the future?