UFC analyst Daniel Cormier blasted Henry Cejudo for training with Jon Jones, and “Bones” has responded to the criticism of his former rival.

Jones was recently kicked out of Team Jackson-Wink following an alleged domestic battery incident at a hotel in Las Vegas following his Hall of Fame induction ceremony back in September ahead of UFC 266. With Jones no longer part of the team, at least until he cleans his act up, he has admitted that he is now looking into other gyms to potentially join, and one of those options appears to be Fight Ready. This past week, photos emerged of Jones training at the camp alongside the former UFC champion Cejudo and alongside UFC middleweight Eryk Anders as he looked to be enjoying Fight Ready. However, while Jones might like the move, there are others who do not like it.

Taking to his social media following the release of these photos showing Jones training at a new camp, Cejudo took to his social media to criticize both Cejudo and his manager Ali Abdelaziz for having Cejudo train with Jones given his legal issues. To that end, Jones himself stormed back and fired a shot at his rival Cormier, suggesting that he is still bitter for their previous encounters and that he is simply a Jones “hater.” 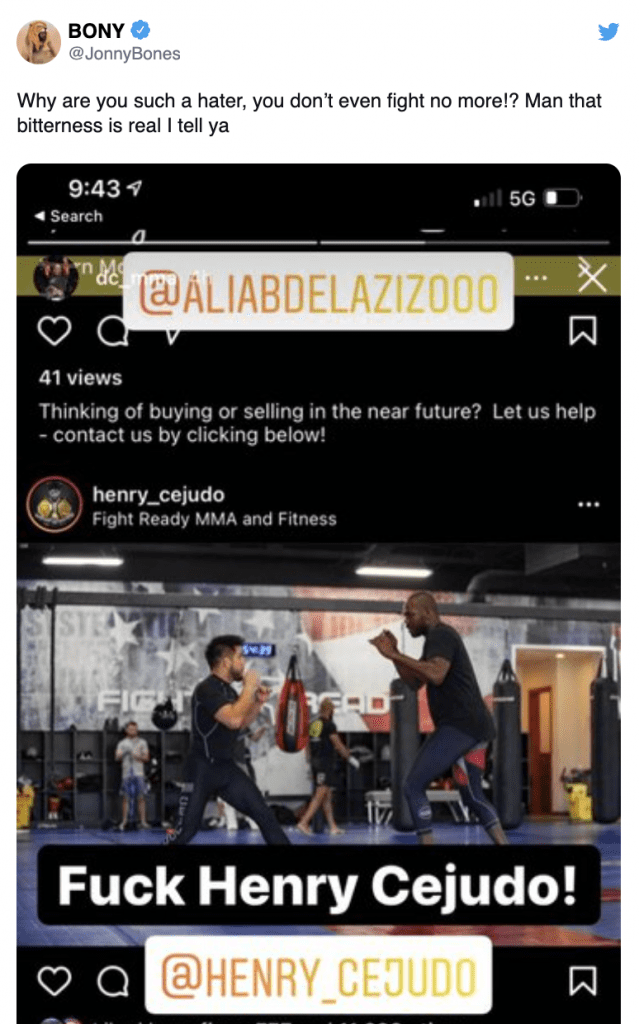 “Why are you such a hater, you don’t even fight no more!? Man that bitterness is real I tell ya,” wrote Jones.

Clearly, there is still no love lost between Jones and Cormier, even after all of these years. Now, we will see if Jones continues with Fight Ready or if he packs up his camp.

What was your reaction to seeing the photos of Jon Jones training with Henry Cejudo, and do you think Daniel Cormier was in the right to criticize Jones and Cejudo?