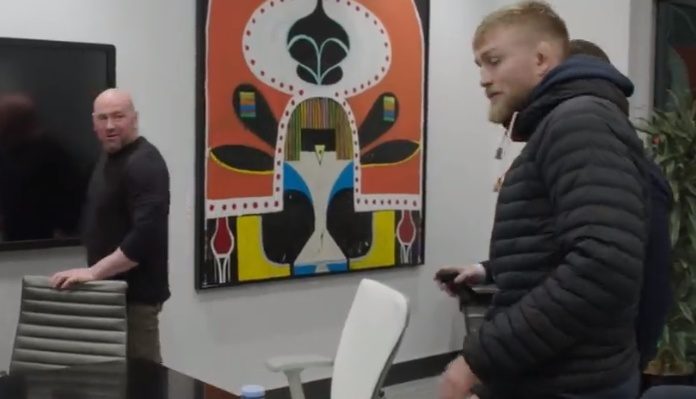 It takes two to tango. So if one party isn’t down to dance, you’ll need to find someone else.

This was the case for Alexander Gustafsson and Jon Jones who are headlining this Saturday night’s UFC 232 event which closes out the year for the UFC.

An event that was originally scheduled to take place in Las Vegas, the event got relocated due to an ‘atypical finding’ in one of Jones’ drug tests. Because of this, the Nevada State Athletic Commission would not license him to compete. Thus prompting a move to Los Angeles, California where Jones has a temporary license.

Of course, Gustafsson would have to agree to go along with this. Which he did, but when UFC President Dana White first gave him the news, he also had the option to delay the fight a few months.

“Just to be clear, this isn’t about me and it’s not about keeping the f*cking fight on,” White told Gustafsson on episode 3 of UFC 232 Embedded. “I’m going to have a fight either way and I don’t gotta go to f*cking L.A but it’s not fair to you and it’s definitely not fair to Jon either. He didn’t do anything wrong.

“We have every expert on f*cking Earth saying he didn’t do anything wrong so the fight should happen. But if you have any doubts in your mind, we can cancel this thing and do it in f*cking March.”

For Jon Jones and Alexander Gustafsson, this will be their second fight against one another and it’s one that has been five years in the making after their instant classic in 2013.

Since then Jones has fought four times and gone 3-0 (1 NC) while Gustafsson has fought five times going 3-2. This rematch will be the Swede’s third career UFC title shot.