Former two-division UFC champion Conor McGregor, who is currently being investigated amid sexual assault allegations, claims he “can’t go on like this.”

Audie Attar, who manages McGregor, and the Irishman’s legal team have both released statements vehemently denying the allegations against him.

Unsurprisingly, McGregor has received plenty in the way of backlash amid these latest accusations of misconduct.

Late on Sunday, the Irish MMA star was targeted by several Twitter users. See his responses, which were promptly deleted, below: 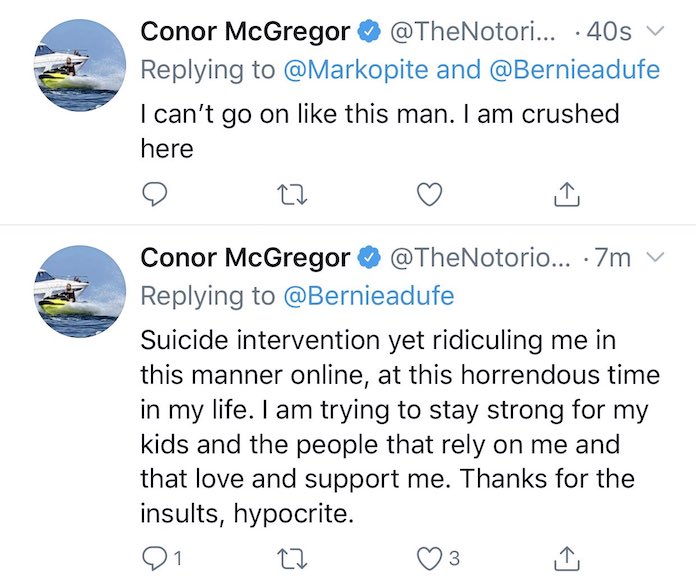 “I can’t on like this man,” McGregor wrote in response to one commenter (via Mirror). “I am crushed here.”

“Suicide intervention yet ridiculing me in this manner online at this horrendous time in my life,” McGregor wrote to another commenter who seemed to work in suicide prevention. “I am trying to stay strong or my kids and the people that reply on me and that love and support me. Thanks for the insults, hypocrite.”

Conor McGregor has not fought since January, when he picked up a first-round TKO victory over Donald “Cowboy” Cerrone. While he initially laid out plans to follow that win with a busy 2020 season, he ultimately retired on June 6, citing a disinterest in the sport. While many fans doubt that retirement will stick, the Irishman, who is a father of two and soon to be married to his long-time partner, Dee Devlin, will likely need to sort out his issues outside the cage before he’s welcomed back to competition.