Conor McGregor has responded after Max Holloway proclaimed himself to be “The best boxer in the UFC” during his fight with Calvin Kattar.

Holloway (22-6 MMA) squared off with Kattar (22-5 MMA) in the headliner of today’s UFC Fight Island 7 event, with hopes of avoiding the first three-fight losing streak of his career. ‘Blessed’ had suffered back-to-back decision losses to reigning UFC featherweight champion Alex Volkanovski in his most previous Octagon appearances.

In the lead up to their highly anticipated scrap, Calvin Kattar suggested that he was the better boxer than Max Holloway. That notion did not prove to be the case, as ‘Blessed’ proceeded to dominate ‘The Boston Finisher’ in the standup game earlier today.

During his beatdown of Kattar, the former featherweight kingpin in Holloway proclaimed himself to be “The best boxer in the UFC”.

Video of Holloway shouting that claim eventually surfaced on the internet and soon caught the attention of Conor McGregor.

The Irishman, who is set to make his Octagon return next weekend against Dustin Poirier at UFC 257, could not help but scoff at the notion proposed by the Hawaiian.

“LOL!” McGregor captioned a video of Holloway telling Kattar that he’s the best boxer in the UFC.

Conor McGregor and Max Holloway have a storied history, having competed way back in August of 2013. That night in Boston, ‘The Notorious’ emerged victorious by way of unanimous decision. 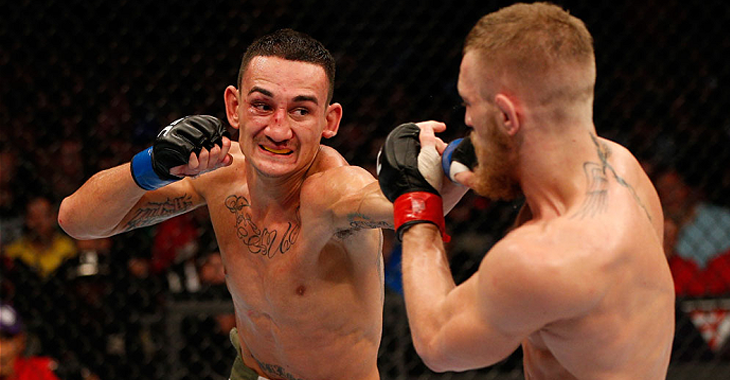 Obviously McGregor does not agree with Holloway’s UFC boxing assessment.

The Irish star has actually taken to the squared circle as a professional during his illustrious career. McGregor squared off with undefeated boxing legend Floyd Mayweather back in 2017, but ultimately lost that fight via tenth round TKO.

Regardless, Conor McGregor was applauded for his efforts against ‘Money’. That praise came not only from fight fans, but also by many professional boxers as well.

Who do you think is the best boxer in the UFC? Share your thoughts in the comments section PENN Nation!