UFC superstar Conor McGregor believes that the welterweight champion of the world, Kamaru Usman is still trying to bite his style.

McGregor is currently sitting on the sidelines with a leg injury that he suffered in a TKO defeat to Dustin Poirier back at UFC 264 in July. Despite being on the sidelines, however, McGregor has continued to troll some of the best fighters in the world on social media during his time off. One of the best MMA fighters right now is Usman, and McGregor is still not a fan of him. According to McGregor, he believes that Usman is trying to rip him off.

Taking to his social media stores this week, McGregor poked fun at Usman for trying to copy his style. Take a look at what McGregor shared this week (h/t MMANews.com). 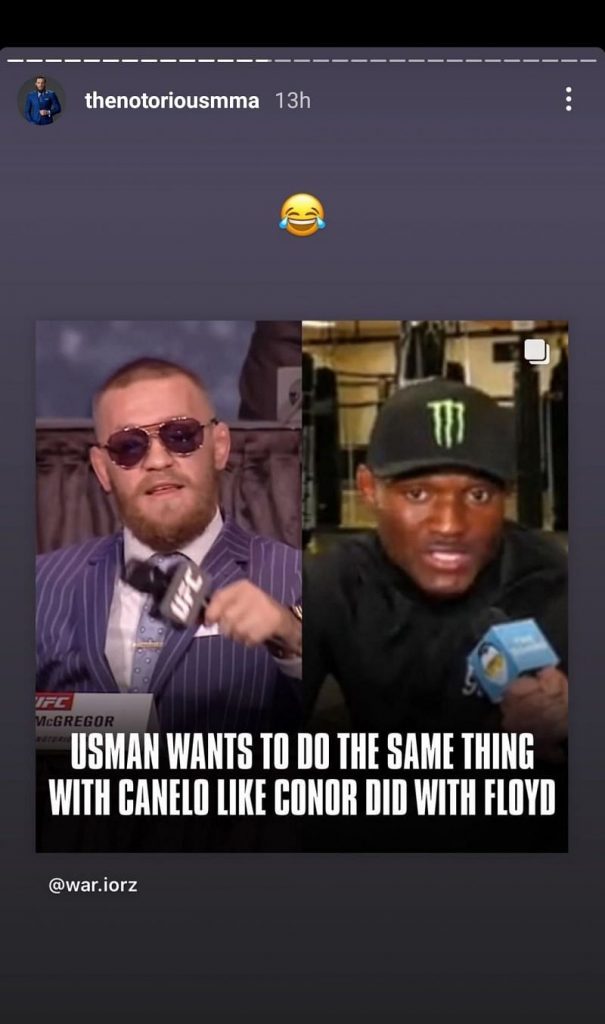 “Usman wants to do the same thing with Canelo like Conor did with Floyd,” the caption reads.

McGregor and Usman do not see eye-to-eye and the two have continually called each other out on social media and in interviews over the past several years. At this point, it seems like a matchup between the two is unlikely just because of McGregor’s serious injury and also the fact he hasn’t won a fight in nearly two years. There is also the weight class difference between them, as McGregor is a lightweight and Usman is a welterweight.

Despite all those issues that could halt a fight from ever happening, there is still a chance that these two could lock horns in the Octagon one day just because there would be so much money on the line. If McGregor is able to come back successful from his injury, and if Usman keeps on winning and wants more money fights, maybe we will see it one day.

Do you agree with Conor McGregor that Kamaru Usman is trying to bite his style?