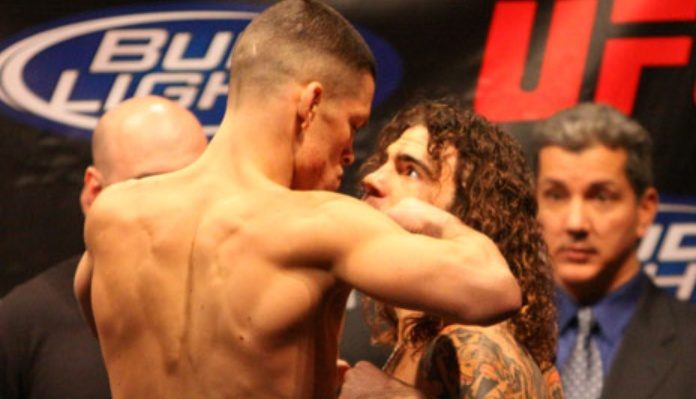 Clay Guida is looking to run things back with Nate Diaz.

Guida and Diaz first met back in January of 2009 at UFC 94 where Guida won by split decision. It was a back-and-forth fight in what was Diaz’s first UFC loss, but it earned both men Fight of the Night honors.

Since the fight, the two have gone their separate ways. Guida has continued to fight the who’s who of the lightweight division. Diaz, meanwhile, fought for the lightweight title and then had his two legendary fights with Conor McGregor. Guida and Diaz also had a backstage encounter at a Combate Americas event where charges were pressed.

Now, Guida is interested in making that fight happen again, as it is a fight he has wanted for quite some time.

“Some fights I’d love to have in the future, I’ve said it before and I’ll say it again and I’ll never back down from this one. Nate Diaz has got it coming to him someday,” Guida said at the virtual media day. “I beat his ass once, I’ll beat his ass again. If he ever toes the line and they stop protecting him, you know my number, Nate. So, don’t be scared, homie. You know where we are at buddy.”

Clay Guida is looking to return to the win column this Saturday when he battles Bobby Green. “The Carpenter” is a sizeable underdog and last time out he was submitted by Jim Miller in just 58 seconds last August. Before that, he beat B.J. Penn by decision at UFC 237.

Nate Diaz, meanwhile, last fought back in the main event of UFC 244 where he suffered a TKO doctor stoppage loss to Jorge Masvidal for the BMF title. It was a quick turnaround for the Stockton native after returning at UFC 241 to beat Anthony Pettis by decision after three years away from the Octagon.

Whether a not the UFC would book a rematch is unknown at this point. Both Guida and Diaz have name value. Yet, Diaz is someone who you never know will fight again. He may only return for a big fight like the McGregor trilogy or Masvidal rematch.

Regardless, Clay Guida hopes to get back into the win column at UFC on ESPN 11 and then fight Nate Diaz next time out.

Would you be interested in seeing Clay Guida vs. Nate Diaz 2?