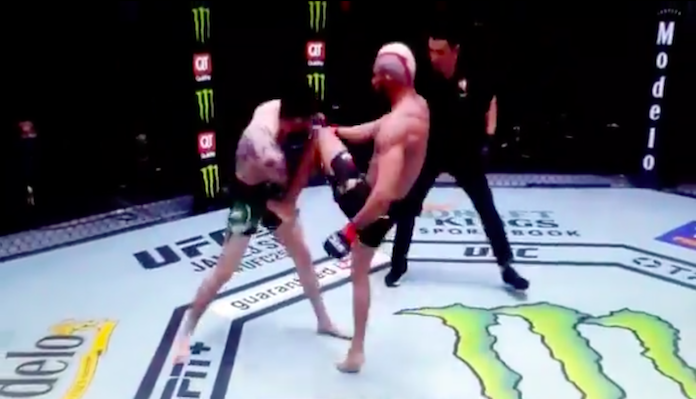 UFC flyweight Brandon Moreno described the “very painful” low blow in the Deiveson Figueiredo fight as “a nasty kick directly to my balls.”

Moreno and Figueiredo went the full 25 minutes in a classic fight that headlined UFC 256. At the end of the five rounds, the judges scored the bout a majority draw, and UFC president Dana White has since confirmed the rematch is happening in 2021. It was a very competitive fight that turned out to be a draw because of a foul that occurred in the third round of the fight. In that round, Figueiredo landed a brutal low blow on Moreno, and referee Jason Herzog took one point for the foul, which ultimately led to the draw.

Speaking to TMZ Sports, Moreno explained how the low blow was “very painful,” suggesting that his wife was more worried than he was himself about the groin strike.

“Actually my wife asked me the same. Like, ‘You’re fine?’ I said, ‘Yes, no problem.’ We have three kids so I don’t care, no problem,” Moreno joked.

“Nah man, at that moment it was very painful. It was very, very painful because he threw a really, really hard direction there. I don’t say it was intentional, but man, it was a nasty kick directly to my balls. I think the first time when the referee told me you can rest a little bit, it was my first time saying yes. Like, ‘Yes please, I need to rest at that moment.’ Because I tried to keep going really fast in the fight because I knew Figueiredo was getting tired in the fight. But I can go faster (in the next) fight, I guess.”

MMA referees are allowed to take a point for a groin strike at any time, but generally, a referee gives several warnings for a low blow foul before a point was taken. In this particular fight, the referee took a point because Figueiredo had committed an eye poke earlier in the contest that was not penalized. Herzog, looking to seize control of a fight that could have gotten out of hand, decided to rightfully take the point from Figueiredo. That point deduction was the reason why Figueiredo vs. Moreno was scored a draw instead. Thankfully, Moreno was not seriously injured in the fight, and we’ll see a rematch in 2021.

How excited are you for the rematch between Brandon Moreno and Deiveson Figueiredo?