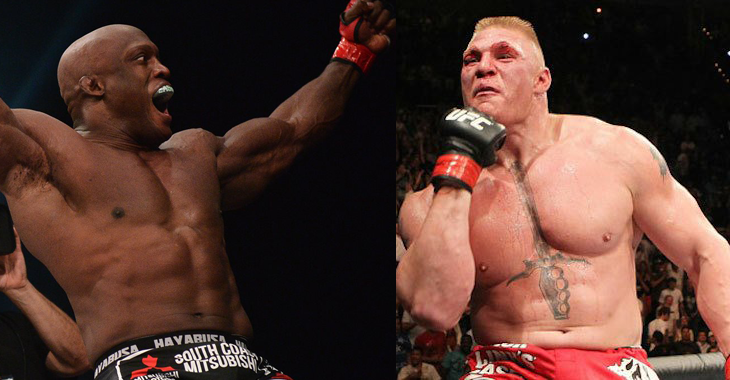 WWE champion Bobby Lashley has called out longtime rival Brock Lesnar for both an MMA fight and for a wrestling match in the near future.

Lashley recently won the WWE Championship when he defeated The Miz in an episode of Raw, becoming the third African-American wrestler to win WWE’s most prestigious title. Lashley, who is 44 years old, is one of the best wrestlers in the world of WWE right now, but he’s also an accomplished MMA fighter, having racked up a 15-2 overall record in mixed martial arts. Lashley has actually won his last eight fights in a row, including five stoppage wins in Bellator, though he hasn’t stepped into the MMA cage since 2016.

Speaking to TMZ Sports, Lashley said he’s open to fighting in MMA again, and the one man that he has his eye on is Lesnar, the former UFC heavyweight champion. Both Lesnar and Lashley have been connected to each other many times in the past, but they haven’t met yet. Lashley, though, hopes that something can happen soon. In fact, not only is Lashley willing to wrestle Lesnar in the WWE, but he’s also willing to challenge him in an MMA fight.

Sending a message to Lesnar’s longtime manager Paul Heyman, Lashley said that the fact he is now the WWE Champion means that Lesnar had more of a reason to fight him now.

“Paul, call me. Before you guys always said that I had nothing and he had no reason to come after me. Now I do,” Lashley said.

Do you want to see Brock Lesnar fight Bobby Lashley in MMA or wrestling or both?