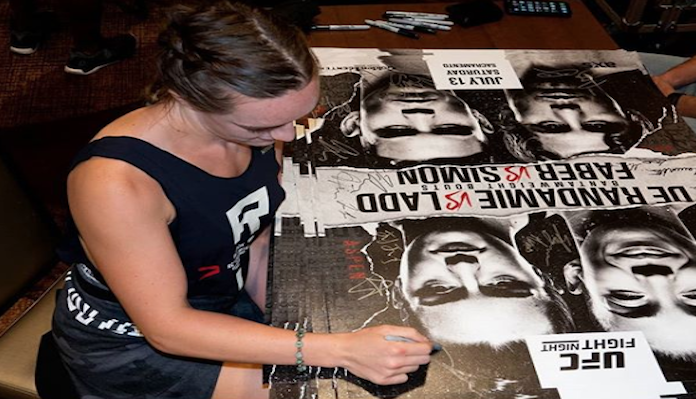 De Randamie stopped Ladd just 16 seconds into the first round in one of many upsets at UFC Sacramento. However, the stoppage was considered controversial by many as it seemed referee Herb Dean stopped the bout earlier than he should have.

Ladd was floored by a straight right of De Randamie and she was hit with a few hammerfists on the mat, but Ladd looked to still have her wits about her as she was looking to grapple. Instead, Dean stopped the fight.

Here’s what Ladd had to say about the controversial stoppage:

Not the result we wanted, I’ll roll with it. Respect to @IronLadyMMA she did her job, it’s all good with @HerbDeanMMA thank u to my crew #MMAGOLD pic.twitter.com/VNn75dClpV

“Not the result we wanted, I’ll roll with it. Respect to Germaine de Randamie she did her job, it’s all good with Herb Dean thank u to my crew MMA Gold” – Aspen Ladd (via Twitter)

The calls for a rematch have been out there on social media, as most believe this was an early stoppage by Dean and we were robbed of what had the potential to be a great fight. On the other hand, Ladd seems to be ok with the way Dean handled his business in this one, so instead of running it back it seems likely Ladd will fight someone else next. De Randamie, meanwhile, has a good argument to get a title shot against Amanda Nunes.

Ladd is just 24-years old so despite the loss to de Randamie, her future in the sport remains very bright. However, after a scare at the official weigh-ins, it’s possible she may consider moving up to 145lbs for her next fight, as it appears the cut to 135lbs is becoming unhealthy for her.

Did you think the stoppage was early in the Aspen Ladd vs. Germaine de Randamie fight?