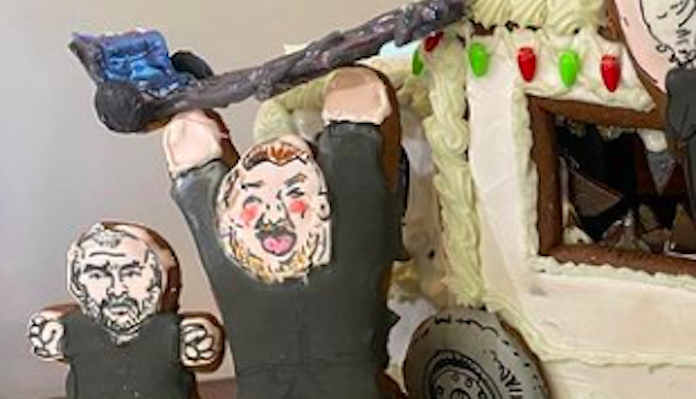 UFC strawweight contender Angela Hill got creative with her gingerbread house this year, drawing inspiration from one of the most infamous moments in recent UFC history.

This handiwork from Hill, of course, is an homage to an infamous 2018 incident involving McGregor, Nurmagomedov and Lobov. The incident occured when Nurmagomedov and his entourage cornered Lobov in Brooklyn, New York, and Lobov’s stablemate, McGregor, responded by flying to New York and hurling a dolly through the window of a shuttle bus Nurmagomedov was riding.

See this masterpiece from Hill below:

While Angela Hill is clearly an artist, her main claim to fame is her MMA career.

Hill holds the No. 12 spot in the UFC strawweight rankings. She’s currently riding back-to-back split decision losses to Michelle Waterson and Claudia Gadelha—both of which were extremely controversial in the eyes of many viewers.

Prior to those setbacks, Hill was riding three consecutive victories over Loma Lookboonmee, Hannah Cifers and Ariane Carnelossi.

Prior to latest stint in the UFC, Hill held the Invicta FC strawweight title. She won that belt with a split decision win over Livinha Souza in 2016, and defended it with a unanimous decision win over Kaline Medeiros before returning to the UFC.

Hill enjoyed her first run with the UFC from 2014 2015, after appearing on The Ultimate Fighter season 20. In her first UFC stint, she went 1-2, defeating Emily Kagan and losing to Tecia Torres and Rose Namajunas.

What do you think of this creative gingerbread house from Angela Hill?