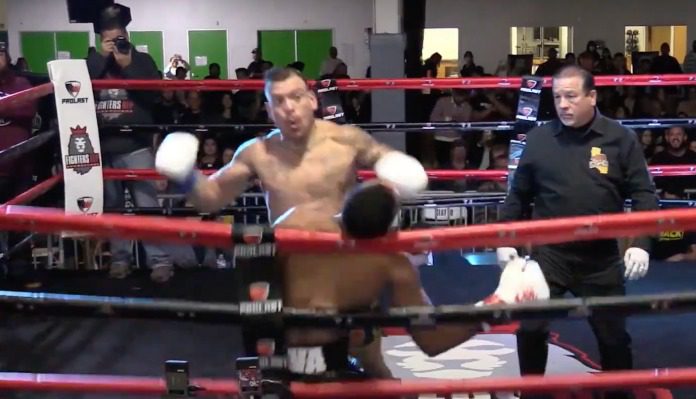 Anderson Silva’s son Gabriel Silva suffered a brutal KO loss with less than 20 seconds left in a kickboxing fight over the weekend.

Anderson had two sons competing on the card and the first was Kalyl Silva who already had a viral eight-second KO earlier this year in his kickboxing debut. He picked up another win on FightersRep 11 as he earned a decision victory Melo Pamuk.

Gabriel, meanwhile, did not have a great night as he fought later on in the night as he fought Vincent Familari for the IKF light middleweight championship. Unfortnately for Gabriel Silva, he was brutally knocked out in the first round.

The full Gabriel Silva fight, including the finishing sequence, in the video below beginning at the 2:41:08 mark. The KO happens at 2:42:49.

After the fight, Gabriel Silva’s opponent Vincent Familari praised him but is pleased with his performance.

“I knew that I had to stay on him, I couldn’t let him recover,” Familari said in his post-fight interview. “I mean, the guy’s good. He could easily beat me, but God was with us on this victory, He blessed us. Much respect to my opponent, his camp, and everybody else, but we did it. We pulled through.”

As for Anderson Silva, he’s coming off a KO win over Tito Ortiz in boxing at Triller Legends 2 back in September. Prior to that, he made his return to boxing and beat Julio Cesar Chavez Jr. by split decision after being released by the UFC. He was released from the promotion following a three-fight losing streak. He is just 1-7 and one No Contest in his last nine in MMA. Who and when he will fight next is uncertain at this time.

What do you make of Anderson Silva’s son being knocked out cold in a kickboxing fight? Sound off in the comment section, PENN Nation!