After a back and forth opening few minutes, Alistair Overeem was able to score a takedown in the late stages of the opening round. “The Demolition Man” would proceed to unleash some nasty ground and pound which eventually forced the referee to step in and call a stop to the contest. (Watch the finish here)

Shortly following his impressive TKO victory over the previously undefeated Russian, Alistair Overeem took to Twitter with the following message.

It’s good to be back. Huge shoutout to @ElevationMMA for all the hard work we’ve put in. THE REEM IS BACK!!! @ufc #ufcbeijing

“It’s good to be back. Huge shoutout to @ElevationMMA for all the hard work we’ve put in. THE REEM IS BACK!!! @ufc #ufcbeijing” – Alistair Overeem

As Overeem began to celebrate backstage, his two most recent opponents, Curtis Blaydes and Francis Ngannou, squared off inside the octagon.

For the second time in his career, “The Predator” was able to stop Curtis Blaydes. This time it took only 45-seconds.

While the feared knockout artist, Ngannou, did mention three potential names for his next UFC opponent, Alistair Overeem was not one of them.

“The Reem” had suffered a viscous knockout loss to “The Predator” at UFC 218 in December of 2017. 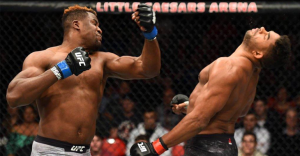 With that said, Alistair Overeem revealed at today’s UFC Beijing post-fight press conference that he still plans to even the score with Francis Ngannou.

“I have a lot of respect for Francis Ngannou,” Alistair Overeem said. “But I’m very ready for a second fight.”

Would you like to see the UFC book a rematch between Alistair Overeem and Francis Ngannou next? Sound off PENN Nation!