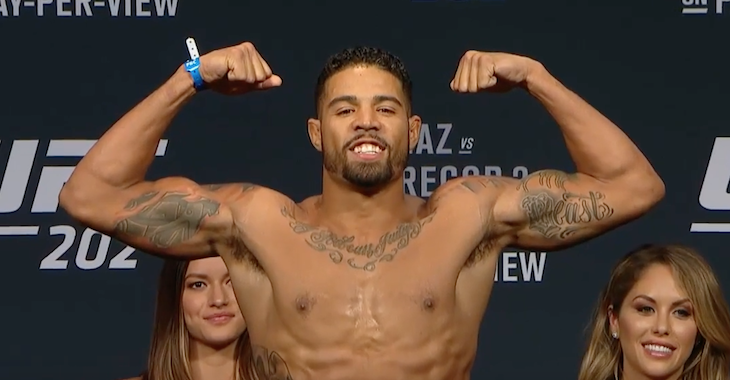 A welterweight showdown between Mike Perry and Max Griffin kicked off tonight’s UFC on FOX 28 main card in Orlando, Florida.

Round one begins and Mike Perry misses with a high kick to start things off. Griffin circles along the cage as Perry utilizes some forward pressure in hopes of cutting him off. Perry misses with a hook but lands a follow up low kick. Griffin with a right hand that partially lands. Perry returns fire and just misses with a right of his own. The fighters clinch against the cage and Max lands a knee. Perry returns fire with one of his own and the fighters break. The crowd chants “Perry Perry” and Mike launches a left hand the just misses the mark. Max with a nice jab followed by a kick to the body. Perry continues to press forward. He throws a side kick and then a nice outside low kick. Griffin lands a jab but Perry is able to counter with a nice kick to the body. “Platinum” with a hard inside low kick. He goes to the body. Griffin circles out and then lands a right hand. He is finding a home for that punch. Another right hand from Griffin. He avoids a Perry haymaker and then lands a nice combination. Griffin with a takedown attempt and he gets it. Perry scrambles back to his feet and then scores a takedown of his own. He winds up in full mount but the horn sounds to end round one before he can get off any significant shots.

Round two begins and Perry throws a front kick to the body. Griffin responds with a combination that ends in a solid right hand. Perry appears to be a little more conservative this round. Griffin with a nice jab. Perry replies with a left hook. Mike goes to the body with a jab. He continues to utilize a lot of forward pressure. Perry with a nice inside low kick. Griffin replies with one of his own. Max with a nice left jab. Perry responds with a hard kick to the body. Perry charges forward and throws a flying knee. Griffin avoids and lands a nice counter strike. Perry with a left hook. Griffin with a straight right. Two minutes remain in round two. Perry lands a front kick to the body. Griffin circles out along the fence. Perry is bleeding pretty badly now. Still he continues to press forward like some type of terminator. He misses with a left hook and Max counters beautifully with a jab. Perry needs to score here. Max lands a left hand that floors Perry. Griffin jumps on “Platinum” with some ground and pound but somehow Perry survives and scrambles to his feet. Round two comes to an end.

LEFT HAND DROPS PERRY!@MaxPainMMA drops Platinum, but Perry gets back to his feet! #UFCOrlando pic.twitter.com/FDUr9Uu4pL

Round three begins and Mike Perry is able to catch Griffin with a beautiful counter right hand. Max is hurt. Perry charges in but Griffin is able to avoid any big shots and survives the onslaught. Perry eats a low kick but continues to press the action. He misses with a right hand but lands a follow up low kick. Ander three minutes remain in round three. “Platinum” with a left hook and then another. Perry is gaining confidence. He is chasing Griffin now. Max returns fire with a jab to the body. Perry lifts up his arms and tries to bait Griffin into a slugfest. Max is not falling for it and remains on his bike. Perry likely needs a finish here. One minute remains. Perry with a head kick. He leaps in with a right hand. He lands a left and then shoots in for a takedown. Griffin is back up and the fighters clinch. Perry needs to break free. Griffin won’t let him. The horn sounds to end round three.